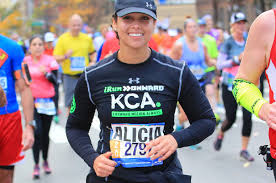 New York, NY, June 17, 2021 --(PR.com)-- Keep a Child Alive has been named an Official Charity Partner for the 2021 TCS New York City Marathon, taking place on November 7. This year serves as the 50th celebratory running of the marathon.

Based in NYC, Keep a Child Alive is a non-profit organization, co-founded in 2003 by Alicia Keys to provide essential support to children suffering from HIV/AIDS. KCA is still fighting for these children. They are determined to help every child on the planet to have a life where they are healthy, educated, have a planet that will serve them and have the opportunity to build a future that is worth fighting for.

KCA has been building Team KCA for three years and they have become a committed family that are fighting for change for these children. KCA wants to expand their family of change makers and build the largest team ever with 100 runners.

COVID-19 has been devastating for so many of us. None more so than the most vulnerable children in the world. That is why this year, KCA wants you to come out and stand in solidarity with those children and their families. It will be one of the most magical and connected events that have been held. Where we have had to stay apart to keep the most vulnerable safe, we now need to come together to do the same thing for these children.

“Supporting charitable causes and organizations are a long-standing tradition of the TCS New York City Marathon as it serves as one of the world’s largest fundraising platforms,” said Christine Burke, Senior VP of Strategic Partnerships, NYRR. “The marathon exemplifies the running community’s spirit of giving back, and no group demonstrates that more than the thousands who choose to run for charity. We are proud to support the efforts of the Keep a Child Alive team and the positive impact they have made to their community.”

“I have seen firsthand throughout this pandemic how children have suffered. I have seen them going with no food and safety. I don’t want to live in a world where this is a reality for any child. It is a privilege to run through our beautiful city, knowing that as we cross that finishing line, we change 150,000 lives.” - Antonio Ruiz-Gimenez, Chairman & CEO of KCA

The NYRR Official Charity Partner Program offers an opportunity for nonprofit organizations to raise funds to support their missions and services. Participating charities can offer guaranteed entry to runners who fundraise on their behalf.

The 2021 TCS New York City Marathon will commemorate the race’s 50th running with runners from all over the world participating in-person and virtually. The marathon began in 1970 and has become one of the most anticipated annual mass sporting events in New York City. This year’s marathon will once again bring together people of all ages and abilities reflecting the resilience and strength of the running community.

About Keep a Child Alive (KCA)
KCA was co-founded in 2003 by Grammy award - winning artist, Alicia Keys to provide essential support to children suffering with HIV/AIDS. Fast forward to today and we are able to widen our project focus. Working around our themes of Kids, Climate and Action, together we are able to ensure a better future for all children. Children are at the heart of our cause and are often the most affected by poverty, disease and inequality. By shifting from charity to solidarity, KCA are working to change this.

About New York Road Runners (NYRR)
NYRR’s mission is to help and inspire people through running. Since 1958, New York Road Runners has grown from a local running club to the world’s premier community running organization. NYRR’s commitment to New York City’s five boroughs features races, virtual races, community events, free youth running initiatives and school programs, the NYRR RUNCENTER featuring the New Balance Run Hub, and training resources that provide hundreds of thousands of people each year with the motivation, know-how, and opportunity to Run for Life. NYRR’s premier event, and the largest marathon in the world, is the TCS New York City Marathon. Held annually on the first Sunday in November, the race features a wide population of runners, from the world’s top professional athletes to a vast range of competitive, recreational, and charity runners. To learn more, visit www.nyrr.org.