ConocoPhillips is an international, integrated energy company. It is the third largest integrated energy company in the United States, based on market capitalization, oil and gas proved reserves and production; and the largest refiner in the United States. Worldwide, of non-government controlled companies, ConocoPhillips has the eighth largest total of proved reserves and is the fourth largest refiner in the world.

Headquartered in Houston, Texas, ConocoPhillips operates in more than 40 countries. The company has approximately 35,800 employees worldwide and assets of $93 billion. ConocoPhillips stock is listed on the New York Stock Exchange under the symbol "COP." 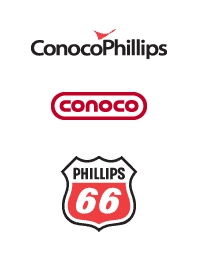 ConocoPhillips
From their beginnings in the early days of the oil industry, Conoco Inc. and Phillips Petroleum Company grew and prospered, becoming leaders in the global energy industry. On August 30, 2002, they combined their complementary strengths and shared values to create ConocoPhillips.

Conoco Inc.
Conoco Inc. began in 1875 as the Continental Oil and Transportation Co. Based in Ogden, Utah, the company distributed coal, oil, kerosene, grease and candles to the West.