WorldSharp Technologies, Inc. announced the 2008 Version of WorldSharp 1042-S Preparation System with Electronic Reporting is shipping. 1042-S is the Tax Form is filed for a Foreign Person’s U.S. Source Income Subject to Withholding.

Angel Fire, NM, February 05, 2009 --(PR.com)-- WorldSharp Technologies, Inc. today announced the availability of the 2008 version of the Worldsharp 1042-S Preparation System. It is ready to ship with the new forms changes and the IRS electronic reporting specifications for 2008. The 2008 version of 1042-S forms have a deadline imposed by the IRS of March 16, 2009 for both mailing and electronic filing. The WorldSharp 1042-S system has a robust yet easy to use capability to import the information from spreadsheets or ASCII data files. The customer support staff is also standing by to help customers import their data.

The 2008 version works with all Microsoft Windows versions from 95 to Vista. Items can be entered using two different modes of data entry. One is a simple fast data entry where the operator enters all fields in a tabular format. The other uses a WYSIWYG Screen that looks just like the printed 1042-S. As already mentioned, the data can also be imported from excel files or files from other computer applications.

Printing can be on blank paper or pre-printed forms. On inkjet and laser printers, the system will print the form and the data. In addition to printing the forms, the system electronically reports 1042-S Forms using the specifications in Publication 1187.

Bobby Anderson, president of WorldSharp Technologies said that in the past, the system was primarily used by banks and financial institutions, which is WorldSharp’s main marketing focus. However, the 1042-S needs to filed by most educational institutions and many other industries. The system is priced very competitively at $169.95 for a single user version and 10-license version for $329.95. When purchasing the 1042-S Version, the user automatically receives the base system which also allows printing and electronic filing of all 1098’s, 1099’s, 5498’s and W-2g’s. Unlike other systems, the WorldSharp 1099 Preparation System allows users to process and any kind of 1099 form and has no restrictions on the number of forms processed.

For additional information or a demo of the 2008 version of the WorldSharp 1042-S Preparation System, contact customer support at (575)445-2504 or visit worldsharp.com. 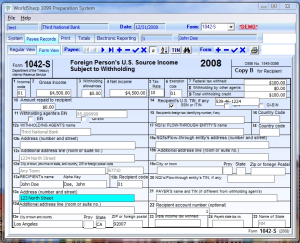