The Colorado River reached it's peak flow in Cataract Canyon on May 26. The river peaked at 52,000 cfs. Meanwhile the Colorado River in Grand Canyon, which is controlled by Glen Canyon Dam, was flowing at only 8000 cfs while scientists studied the affects of last years man made flood. 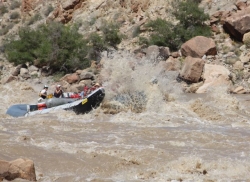 The Colorado River reached its peak flow for 2009 in Utah's Cataract Canyon on May 26. The river was flowing at a raging 52,000 cfs(ft^3/s). Cataract Canyon is known for it's exciting rapids and "when the river reaches flows over 50,000 cfs the rapids are awe inspiring" says veteran rafting guide Walker Mackay. The Rapids known as the "Big Drops" are so large that the National Park Service sets up a river rescue camp below the rapids when the river reaches the 50,000 cfs mark.

Mackay was the trip leader on Colorado River & Trail Expeditions' rafting trip that rafted the Big Drops on the day of the peak flow. The rafting trip had 25 people aboard two 35' motorized pontoon rafts customized to handle the incredibly large waves, whirlpools, and boils. When the river peaks it also becomes strewn with lots of debris including full size cottonwood trees, telephone poles, and railroad ties that have been swept away by the high water. The river also carries a huge amount of sediment which makes great beaches when the river drops later in the year. The peak of 52,000 cfs in 2009 was only the third year since 1998 the river has reached the 50,000 cfs mark.

Ironically, on May 26 the Colorado River in the Grand Canyon, which is regulated by Glen Canyon Dam, was flowing at a meager 8000 cfs while scientists studied the affects of last years 42,000 cfs man made flood. Because Glen Canyon Dam is in place, all of the sediment brought through Cataract Canyon settles in Lake Powell instead of settling on Grand Canyon beaches. This has led to less riparian habitat for plants and animals, and poor camping areas for river runners. The idea of last years Grand Canyon flood was to bring sediment up from the river bottom and deposit sand on the beaches. Initially most river runners thought it was a successful endeavor, but now not everyone is sure. Mackay, also a Grand Canyon river guide claims "a lot of the sediment initially deposited on the beaches by the 2008 flood has been removed by Glen Canyon Dam's flow regime which maximizes power output, and by big rain storms last summer."

For more information on rafting Utah's Cataract Canyon or the Grand Canyon call Colorado River & Trail Expeditions at (800)253-7328 or visit their website (www.crateinc.com).