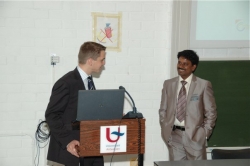 Antwerp, Belgium, September 23, 2009 --(PR.com)-- Dr Ravishankar Polisetty presented, in his keynote lecture, an interesting concept of DIBS (Differential Integration of Biological Systems), which he developed over several years and presented for the first time in The 3rd Antwerp Medical Congress in the Antwerp medical University. Sidney Brenner (2001) suggested three approaches to Systems Biology and Dr Polisetty had adopted middle out approach of systems biology to alter the Action potentials in experimental models. The fundamental concept of his theory is that the cells of the same tissue may have different Resting Membrane Potentials (RMPs) under different conditions. He applied the knowledge of diets to alter RMPs and this, according to him leads to Different States of Reactivity of cells and under a specific reactive state, a specific metabolic algorithm gets kicked off leading to a specific response to an external stimulus.

There are in general, three states of Reactivity according to him based on the value of the RMPs recorded - viz., Hyper-Reactive, Normo-Reactive or Spontaneously Reactive and Hypo-Reactive States, which trigger different Metabolic and Biochemical Pathways. For eg., Macrophages synthesize various Immunoglobulins and its not really clear under what circumstances are these Igs synthesized. Dr Polisetty had come out with a convincing explanation. He opined that, if a Macrophage has a RMP very near to its threshold then, it become hyper-reactive and when it become Hyper-reactive then it synthesizes Ig E and triggers Allergic reactions. And if the macrophage records a very low RMP then, it requires a larger stimulus to elicit an Action Potential. Explaining this situation in a bacterial invasion – when the RMP is very low then, the macrophage requires a higher concentration of Bacteria in the blood for the bacteria to elicit an action potential in the macrophage. By the time the macrophage acts on the bacteria by appropriate synthesis of Immunoglobulins, the bacteria might already have caused some extent of damage to the internal organs and alters the tissue. This altered tissue is perceived by the Macrophages as a foreign body and starts producing anti-bodies against its own organs and hence an autoimmune reaction is executed. And finally, he also opined that a spontaneously reactive State is the most favorable state for its normal and spontaneous action.

He demonstrated a successful cure for MI in experimental rats applying his theory of DIBS. He concluded that gene-expression could also be accordingly affected by proper application of the concepts of DIBS.

He plans to come up with a virtual cell model which could predict events in the future applying DIBS in the near future.