New Book on Teen Depression: "Save the Teens: Preventing Suicide, Depression and Addiction"

“Save the Teens: Preventing suicide, depression and addiction” written by Carolyn C. Zahnow, gives help and hope for those whose lives are touched by teens by providing the signs of depression and substance abuse – all in an effort to prevent the loss of life by suicide.

“Save the Teens: Preventing suicide, depression and addiction” written by Carolyn C. Zahnow with contributions by Katharine Leslie, PhD, gives help and hope for those whose lives are touched by teens by providing the signs of depression and substance abuse – all in an effort to prevent the loss of life by suicide.

Zahnow has researched and explored teen depression and other topics that came between her and her 18 year-old son and has written “Saving the Teens: Preventing suicide, depression and addiction” as a result. She lost her son to suicide in 2005 due to many suspicious factors in his life – depression, addiction, and his failure to learn how to overcome troublesome personal issues.

The opening chapter, entitled “Cameron’s Final Day,” is the author’s recanting the events the day she found her son had hung himself in their Texas home. This sets the stage for the following chapters on: teen depression (the symptoms and signs), addiction, methamphetamine (Zahnow’s son was addicted to meth), suicide (statistics and signs to watch for), survival after the loss of a loved one to suicide, and a Help and Advice section.

“Save the Teens” layout is unique in that research and facts are on the right pages while the left pages contain memoir of life with the author's son and his writings and artwork. These relate to the chapter on the facing page. The reasoning behind sharing these items is to provide possible clues to a teen’s depression – perhaps another way to gauge if a teen might be depressed. The reader can read the book in any manner they desire – by reading the right side first and then going back and reading the left side. Or they may only want to read the personal story. In any case, readers will come away more knowledgeable about the teens in their lives.

The author is a native North Carolinian as was her son. She not only speaks to parents about the teens living under their roofs, but also started a support group in Wake Forest for those who have lost someone to suicide (http://www.wakeforestsos.com). Zahnow attended a support group while living in Texas two weeks after her son’s death. It was while attending SOS support groups she heard other parents, as well spouses and friends say, “If only I’d seen the signs.” These words propelled the idea of the “Save the Teens” project that teaches parents and others the signs of teen depression as well as substance abuse. It also propelled Zahnow to get her book published and share her experience with others.

Zahnow is aware that students receive information in school about depression, but their parents do not. Parents don’t know what to expect from their ever-changing child. Too often it’s too late to save them. Prevention is the hope – not postvention care of grieving parents. 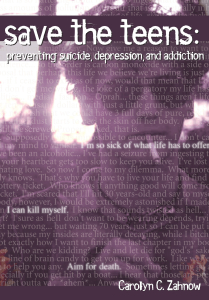 Save the Teens cover