Filmmakers Use Social Media to Record Legacy of the Space Program, Invite the Public to Share Their Memories

On July 8, 2011, millions of people will watch coverage of the last space shuttle flight and remember a moment in time when all things became possible. "The Space Crowd," which chronicles the US Space Shuttle program through the eyes of the American public, produce the film, a "Sociomentary." The film, made in cooperation with NASA, captures personalities, activities and stories from NASA's biggest fans as they countdown the launch of Space Shuttle Atlantis, and the end of the Shuttle program. 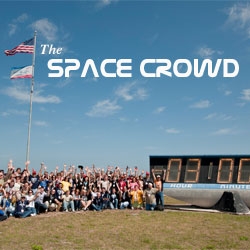 Madison, WI, June 30, 2011 --(PR.com)-- July 8, 2011, a million people are expected to convene around the Kennedy Space Center to experience the last space shuttle flight, STS-135 Atlantis and remember a moment in time when all things became possible. Millions more will watch on TV and the Internet. Hundreds of them will be featured in an upcoming film about the US Space Program. You could be featured in the movie too. Join The Space Crowd: Contribute shuttle-related stories to upcoming film.

The Space Crowd, an independent film by two Wisconsin-based filmmakers, Troy Janisch and Mike Klein, along with Boston filmmaker, Tom Koulopoulos, will document the memories of the space program as well as the July 8th event for NASA in a documentary that will be released in early 2012.

"Social media is changing the rules of the game for documentaries. The Space Crowd is the first in a new genre of 'Sociamentaries' that chronicle significant events from the point of view of the people who experience the event, executive producer," Mike Klein said.

The film is being shot in the vicinity of Kennedy Space Center (KSC) at the time of the launch featuring insights from ordinary people attending the event from several vantage points, such as NASA's Tweetup. More than 5,500 individuals applied for NASA's Tweetup event in May hoping to snag one of 150 seats from NASA's three-mile vantage point. Filmmakers will capture perspectives on the space program and shuttle launch from Tweetup participants, NASA employees and others that gather for the launch.

Other space fans can also participate from their own homes or public launch viewing areas by uploading videos of themselves sharing Shuttle-related stories, inspiration and opinions. Videos are accepted at The Space Crowd website (http://www.TheSpaceCrowd.com) and on the Vimeo video-sharing website (http://www.vimeo.com/groups/thespacecrowd) Vimeo Group. Video submitted in High Definition will be eligible for inclusion in the Film. Other videos will be shared on the site.

All individuals submitting video will be listed in film credits.

“The US space program belongs to everyone, so it's only fitting that everyone contribute to the story as it comes to an end,” said Troy Janisch, the film's executive director. “Social media and video technology make it possible for anyone to contribute stories, opinions, and insights to the film.”

Scheduled for mandatory retirement in 2011, NASA's Space Shuttle program started in the late 1960s and has dominated NASA's manned operations since the mid-1970s. It is the only space program that the X and Y generations have ever known and it's the program that instilled a spirit of discovery, exploration, and wonder in youthful baby boomers. The future of manned spacecraft is uncertain. The shuttle's planned successor has been scaled back and heavily privatized.

The movie is targeted for release March 9, 2012, at the SXSW® Film Conference and Festival.

Tom Koulopoulos, director of The Space Crowd, said there is no better time to gather public opinion and emotion towards the space program and share them on film and online.

What is a NASA Tweetup?

A Tweetup is an informal meeting of people who use the social messaging medium Twitter. NASA Tweetups provide @NASA followers with the opportunity to go behind-the-scenes at NASA facilities and events and speak with scientists, engineers, astronauts and managers. NASA Tweetups range from two hours to two days in length and include a “meet and greet” session to allow participants to mingle with fellow Tweeps and the people behind NASA's Twitter feeds. Registration for NASA Tweetups will be announced on this page, @NASA and @NASATweetup.

NASA Tweetup attendees can have more than 3 million combined followers.

About 25 people support NASA Tweet ups at space shuttle launches in one form or another throughout the months of planning and execution.

Thousands of NASA employees have roles in a Shuttle Launch.

The shuttle can carry up to 50,000 lb (22 700 kg) of payload into low earth orbit, along with five to seven astronauts (although eight have been carried).

The shuttle is the only winged manned spacecraft to achieve orbit and land, and the only reusable space vehicle that has ever made multiple flights into orbit.

The shuttle program started in the late 1960s and has dominated NASA's manned operations since the mid-1970s.

The shuttle program is scheduled for mandatory retirement in 2011, in accord with the directives President George W. Bush issued in the Vision for Space Exploration.

The total cost of the shuttle program is estimated to be $174 billion when the shuttle retires in early 2011.

Troy Janisch, Executive Director : Troy Janisch (@socialmeteor), Publisher of Social Meteor, is a writer and social media beatnik. He is a contributor to SmartBrief on Social Media and Social Media Today. Troy is the idea guy behind "The Space Crowd." He attended STS-134 NASA Tweetup and wanted to return to STS-135 Tweetup to capture the experience on film. Troy is an experienced producer of web videos, DVD content and TV Commercials. Projects under his supervision routinely receive Telly and WAVE award recognition.

Tom Koulopoulos, Director : Tom Koulopoulos (@tkspeaks) is founder and CEO of the Boston-based technology think tank Delphi Group, the author of eight books, and a frequent contributor to national and international print and broadcast media including: BusinessWeek, the Wall Street Journal, Forbes, CNBC, CNN and NPR. Tom is also the creator and founder of DelphiTV and IndividualTV, which, since 2001, have been producing recorded and live web-based video events focused on leading edge trends and technologies.