"Princess Revolution!" is a rocking celebration of Girl-Power, Princess Power, & "sparkle-tacular" girls by multiple award-winning, #1 NYC Mommy Rocker, Moey. Kick off your glass slipper and join the Princess Revolution. 15 track CD debuts 4/24/12. The title single is available now as a free download on CDBaby.com. Review copies of the CD available upon request. 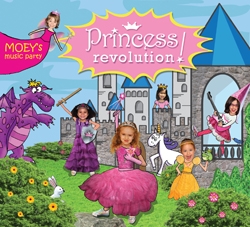 “Princess Revolution! is a girl-power concept album that celebrates the exuberant, can-do spirit inherent in all girls,” said Moey, a.k.a. Melissa Levis, lead singer and songwriter of Moey’s Music Party. “I want to entertain kids while empowering them with the message that girls aren’t helpless; they are sparkle-tacular heroines who can wake themselves up with their own magical kisses, slay the dragon and even rescue the prince!”

The 15-track CD, Princess Revolution! will be released Tuesday, April 24 (SRP $13.98 for CD, $9.99 for download), during the first ever National Princess Week. The rocking original songs explore topics that include body image, keeping promises, understanding emotions and speaking up against bullies. Moey’s Music Party also has reimagined the children’s classics “The Hokey Pokey” and “Five Little Monkeys” as “The Princess Pokey” and “Five Little Princesses.”

Princess Revolution! builds on the success of Moey’s Music Party’s 2011 CD/DVD release, Happily Ever Moey! A Fairy Tale Lark in Central Park (winner of Parents' Choice, NAPPA, Kids First! and Creative Child awards—and named one of the top 10 products at Toy Fair 2012 by The Toy Man), and includes modern musical retellings of “The Princess and the Frog,” “The Princess and the Pea,” “The Little Mermaid” and “Sleeping Beauty.”

To kick off the release of Princess Revolution! Moey invites mommies, grandmas, aunties and kids to visit MoeysPrincessRevolution.com to become a tiara-rific princess.

Moey’s Music Party’s award-winning debut CD and Happily Ever Moey! CD/DVD are distributed by NewSound Kids and are available for purchase and download on iTunes, Amazon.com and CDBaby.

For more information about the band and the current release, visit MoeysMusicParty.com and MoeysPrincessRevolution.com. 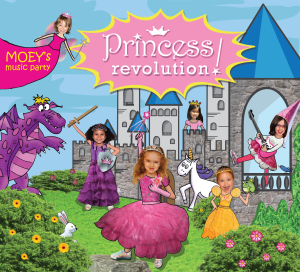 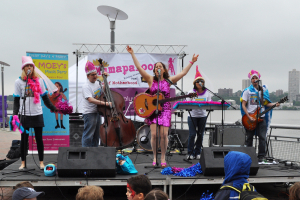 A high resolution image of Moey's Music Party in performance at Mamapalooza. Photo credit: Bitten By A Zebra Photography.

The title song from Moey's Music Party's 3rd CD, Princess Revolution!, which will be released during National Princess Week on April 24. ATTN Radio Editors/Reporters: Feel free to use this song for airplay.