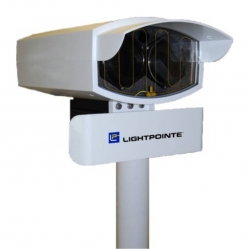 “The HyBridge SXR-5 provides enterprise, government and 4G/LTE telecom carriers with an affordable outdoor wireless bridge solution for applications such as point to point building connectivity, 4G/LTE small cell backhaul and security camera backhaul,” said John Taylor, Vice President of Sales for LightPointe. “Our Five 9’s for Five 9’s promotion this month enables our valued distributors and resellers to stock up on the HyBridge for just US$9,999.90, which is thousands less than competing alternative links which utilize only radio frequency or FSO transmission. The design of HyBridge wireless bridges goes beyond traditional outdoor radios by employing a patented combination of 4th generation 850 nm wavelength Free Space Optics ‘green technology’ and RF technology. In more than 99% of operating conditions the bridges rely on advanced laser transmission, which is faster than fiber, highly secure, license free, and immune to RF interference and congestion issues. Yet the system can automatically switch to RF transmission if conditions warrant, which is typically less than 1% of the time. The switching is completely transparent and automatic, and provides a built-in backup for the link, giving IT managers and network planners the added piece of mind of constant failsafe connectivity. Whether connecting two buildings in a school or business campus setting, or deploying hundreds of LTE small cells in an urban environment, nothing on the market today beats the ROI of the HyBridge Gigabit Ethernet bridge.”

The HyBridge SXR-5 was designed at LightPointe’s R&D center in San Diego, California, where it is also manufactured. The company has deployed wireless bridges in over 14,000 sites around the world.

Features of the HyBridge wireless bridge include:

High speed full-duplex Gigabit wireless connectivity for highly secure, reliable transmission up to 1,100 meters at 3 dB/km or 850 meters at 17 dB/km.

Exclusive patented DualPath™ architecture for up to 99.999% network availability, even in dense fog and heavy snow.

Intuitive AireManager™ Web interface allows links to be configured and monitored from a network computer.

Superior RF technology via both OFDM and 4 antenna/2x2 MIMO technology, for higher data rates and lower interference in congested areas.

Channel Shifting operates at frequencies different from those used in unlicensed 802.11 networks, for increased security. Links are undetectable by most 5 GHz devices.

The HyBridge SXR-5 is available through LightPointe’s network of authorized channel partners and through the company’s AirePointe Security & Government Solutions Division partners. LightPointe has deployed thousands of wireless bridges worldwide including the United States, Germany, France, Italy, Spain, Australia, China, the United Kingdom, Brazil and certain countries in Africa and the Middle East.