Weidlinger is the structural engineer for all phases of the $325-million National WWII Museum expansion, which includes multiple pavilions and a signature fabric canopy. 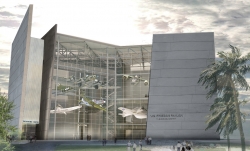 The US Freedom Pavilion: The Boeing Center marks the completion of the fifth phase of the museum’s $325-million expansion. The building showcases a variety of artifacts that represent the “big guns” of American military might, including the B-17E Flying Fortress and the B-25J Mitchell bomber, as well as an SBD-3 Dauntless dive-bomber, a TBM Avenger torpedo bomber, a P-51D Mustang fighter, and a Corsair F4U-4 fighter. The pavilion has a massive wall honoring WWII Medal of Honor recipients and an interactive submarine experience based on the final mission of the USS Tang.

In 2004, Voorsanger and Weidlinger won an international competition to design the museum’s new campus. Voorsanger’s plan was for five low-rise pavilions to be grouped around an interior parade ground. Their visual continuity was enhanced by a dramatic 540-foot-long, fabric “peace canopy” and sunshade that provided “an urban-scale, recognizable image signifying a national museum.”

“We are proud to continue to support the museum’s expansion which, for us, began with our participation in the original awards submittal in 2003,” said Weidlinger Principal Tian-Fang Jing, who served as lead for the structural engineering team. “Given the museum’s location, one of the main challenges for Weidlinger was to protect all of the structures, including the fabric canopy and the highly irregular and massive precast facades, from the impact of major storms. The Freedom Pavilion was a separate challenge because of its uninterrupted exhibit space, transparent and irregular facade, and unusual display items.”

The 96-foot-high US Freedom Pavilion has freestanding columns, no interior floors, and a sloping facade consisting of irregularly shaped horizontal panels, up to 40 feet long, that cantilever as much as six feet. Ten-foot-deep trusses support the pavilion’s roof, along with its facade and suspended “weighty” exhibits, including a B17 from the war. Funds for the pavilion came from a $20-million Congressional grant through the United States Department of Defense and a $15-million gift from The Boeing Company. This gift from Boeing, which built the B-17, represents the largest private contribution the museum has received to date.

The project was the recipient of a 2011 Public/Institutional Design Excellence Award from the Precast/Prestressed Concrete Institute. The huge precast pieces, generally 8 feet high and from 30 to 50 feet long, have no 90-degree corners, and all of their joints are offset from each other. Construction will begin in 2013 on the canopy, which will preside over the campus at 130 feet, 30 feet above the tallest building, and be supported on a 150-foot-high V-shaped pedestal that broadcasts the dual messages of peace and victory.

Called “A Salute to Freedom,” and presented by CenturyLink, the opening marks a long weekend of celebration as an array of VIPs, veterans, and young scholars from every state in the union and the District of Columbia gather in New Orleans for the occasion just weeks before the city plays host to Super Bowl XLVII. Attending will be members of the national news media, political leaders, corporate presidents, student historians, and hundreds of military heroes from WWII and subsequent wars, as well as from all branches of service.

“We are the nation’s WWII museum,” National WWII Museum President and Chief Executive Officer Dr. Gordon H. “Nick” Mueller said, “and with the opening of the US Freedom Pavilion: The Boeing Center, we’ll have even more to display to our community, our visitors, and the world. It will be an exciting and emotional event.”

The National World War II Museum tells the story of the American experience in the “war that changed the world” – why it was fought, how it was won, and what it means today. Dedicated in 2000 as The National D-Day Museum and now designated by Congress as America’s National World War II Museum, it celebrates the American spirit, the teamwork, optimism, courage, and sacrifice of the men and women who fought on the battlefront and the home front. For more information, call 877.813.3329 or 504.528.1944 or visit www.nationalww2museum.org. Follow us on Twitter at WWIImuseum or visit our Facebook fan page.

Weidlinger Associates, Inc., is a 300-person structural engineering firm that designs and rehabilitates buildings, bridges, and infrastructure and provides special services in applied science, forensics, and physical security. For more than 60 years, the firm has been recognized worldwide for its innovative and practical design solutions and for its long-term commitment to advancing the state of the art in engineering. Headquartered in New York City, the firm has branch offices in the United States and the United Kingdom. For more information, please see www.wai.com.
Contact
Weidlinger Associates, Inc.
Lynn Trono, Linden Alschuler & Kaplan PR
212-575-4545
www.weidlinger.com
ltrono@lakpr.com