iQue Repair, a National leader in the iPhone®, iPad® and iPod® repair industry and one of Utah’s fastest growing businesses, starred in this year’s Macworld/iWorld 2013 Conference: The Ultimate iFan Event. 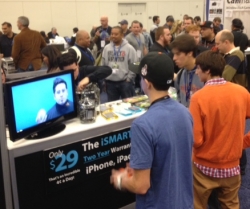 “This Apple-centric conference is our event,” says iQue’s CEO, KC Kelly. “We began repairing mobile devices immediately after the doors opened and continued all three days. With no prior announcement that we’d be there, people brought their devices to us for repair while they explored the conference and visited other displays.”

Macworld hosted their annual iWorld Conference, dubbed “The Ultimate iFan Event,” at the Moscone Center in San Francisco California where reportedly more than 25,000 Apple enthusiasts converge seeking the latest technologies, applications and innovations for their mobile devices. A last minute cancellation opened up a booth, and in blizzard-like weather, the iQue team packed up overnight and headed west from Utah to attend the event with 250 other Apple product vendors.

Kelly continued, “I’d like to think we lived up to our same day repair service motto as our team of on-site technicians repaired non-stop throughout the conference, gave lots of IOS advice and made hundreds of great contacts. Also, our iSmart Protection plans featuring unlimited repairs with no deductibles was a big hit among Californians.”

Owner, Morgan McKell added, “When the conference doors closed we still had people leaving their devices with us overnight. We were surprised at the number of attendees walking around this premiere event with damaged devices; but I guess that’s what we’re in business to do."

“The Macworld/iDevice 2013 Conference was a big success for iQue and since it’s among the leading events supporting the Apple user community,” McKell concluded, “we’ll be back next year with a larger team of technicians to repair the full spectrum of Apple mobile devices.”

Though not affiliated with Apple, Inc., iQue Repair shares a common vision for providing quality products, protection and repair services for AppleTM mobile devices and computers. iPhone®, iPod® and iPad® are registered trademarks of Apple, Inc. iSmart ProtectionTM, iSmart EliteTM, and iSmart Monthly Plans are Trademarks of iQue Repair, LLC. iQue Repair, LLC is a member of the Utah Technology Counsel and ConnectShare.com. They are also finalists in Forbes’ 2013 search for America’s Most Promising Companies.

Their iQue Repair video advertising their iSmart Protection plans recently went viral. Its message is simple, “If you pay anything for an iDevice repair, you’re paying too much. Think Repair, Not Replace.”

Please contact David, The iSmart Guy, at David@iQueRepair.com or 855-IQUEREPAIR or for additional information on iSmart Protection Plans for your organization, company, school district or raising funds for your worthy cause.
Contact
iQue Repair, LLC
Vinny DiGirolamo
801-508-4349
http://www.iquerepair.com
For iSmart Protection Plan information, contact David at 801-872-4349 or David@iquerepair.com.

Copy of the Press Release