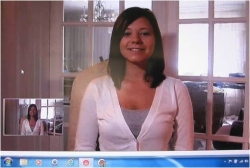 Military Grade Private Secure Communications with No Intermediate Computers or Outside Access of any kind to connect and host the calls. This means in addition to the AES Encryption options of 64-bit, 128-bit, 256-bit and 512-bit Keys and Auto Burn Message/Wipe Clean/No Copy options, no one can access your calls, even MTY. VOVIE is designed to stop spies including the types mentioned in the New Yorker article URL below on Edward Snowden, NSA.