Blue Donkey Iced Coffee, an Atlanta business known for their all natural iced coffee drink, provided bottles and sponsored Ed Bolian of Lamborghini Atlanta on his U.S. coast-to-coast speed record. Ed drove across the entire United States in an impressive 28 hours and 50 minutes. Bolian and two friends got into a Mercedes-Benz CL55 and with an average speed of 98 mph, launched themselves from midtown Manhattan to Redondo Beach, California. 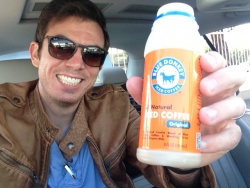 Ed noted to Fox News, “We honestly went pretty much as fast as we could the whole time,” Bolian continued. “We drove in a very careful way and we didn’t do aggressive passing or do any driving on the shoulder, but in order to maintain that kind of average, you’ve got to go really fast.”

Previous record was held by Alex Roy and David Maher's who made it in 31 hours and 4 minutes, which set it in a modified BMW M5 in 2006. Alex Roy has declined to comment on Ed Bolian's new record.