Shah Peerally, a well known attorney in California practicing immigration law has released his book, "The Immigration Lawyer-Asylum," on Amazon.com, Kindle and audio on Audible.com. The book, although an entertaining fiction, covers a number of important immigration issues especially the treatment of certain Middle Easterners. The story goes into great details in explaining a removal proceeding (deportation), a detailed description of the operations of an immigration court, and defensive asylum. 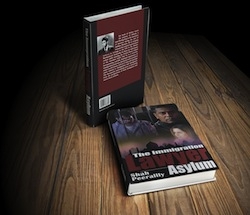 San Francisco, CA, March 01, 2014 --(PR.com)-- Shah Peerally is more than a just a renowned lawyer. He is a humanitarian and an expert in United States immigration. Being himself an immigrant, he understands the hardship faced by new immigrants aka arriving aliens. At an early stage Shah realized that most new immigrants aren’t fully aware of their legal rights which render them vulnerable to abuses. As a result, Shah spent much of the beginning of his career speaking about 'Know Your Rights' in mosques, churches and temples.

After working for two prestigious law firms, in 2005, he opened the Law Offices of Shah Peerally which will ultimately become the Shah Peerally Law Group PC. In 2010, Shah started a radio show on AM radio KLOK 1170 AM and an online radio at www.AttorneyOnAir.com. His radio shows are a praised for helping thousands understand the law and making a good decision on their cases. In the same spirit of helping the community, in 2011 Shah started a small production company (Shah Peerally Productions Inc). The company gained momentum by releasing three movies including one full feature film and two short dramas, two of which were selected for the movie festivals. All the movies tackle immigration law problems and other socially sensitive issues such as domestic violence, INA 221g Administrative Processing and Immigration Fraud.

Today Shah is considered one of the most respected attorneys of his time. He has been featured as an expert on major TV networks such as NDTV, Times now and his work published several major newspapers. He has been rated by Avvo.com as a Superb attorney with a perfect 10/10 score, and in 2013 was selected as a Rising Star by Superlawyers.com. With his social activism, Shah hopes to better the lives of the immigrants through education and advocacy. Recently Shah has been focusing on writing books as a means to educate the community.

Shah's new book, "The Immigration Lawyer Asylum," seems to have all the ingredients to keep the reader captivated including how a US immigration court functions. Being an attorney author, he wants to use his book to assist the average US citizen and immigrants to understand the realities of being a new immigrant. In this book, he covers immigration law, hate crimes and other sensitive issues and their implication on society.

Reading this book will fascinate you, especially because it has realistic law notions embedded into a fiction novel. "The Immigration Lawyer Asylum" was written from the attorney author’s perspective, and all the US immigration issues found between the lines have been experienced by Shah Peerally. From his immigration and visa lawyer experience, he managed to create an amazing work of fiction which will guide many who plan to go to America. The American dream is not the same for everybody, and the land of opportunities comes with its difficulties and can sometimes be an American nightmare. The situation is worse when there is nobody to explain the law and most of the things one should know about the United States of America. This book is recommended to all the American natives who are unaware of the struggle of the immigrants. It also gives an overview of the operations of agencies such as the Department of Homeland Security including its subdivisions such as the United States Citizenship and Immigration Services (USCIS), the Immigration Custom Enforcement (ICE) and the Custom Border Patrol (CBP).

Immigration lawyer Shah Peerally is definitely a person with substantial experience. In his eagerness to educate the public, he wrote the book which is both entertaining and useful. Inspired by his real experiences, he created an amazing educational work of fiction which is not only captivating but illustrates the process of present US immigration system.

The main character in the book is Sarah, a corporate lawyer turning into an immigration lawyer. She is married to a Caucasian Muslim immigrant from Bosnia. Not happy with the corporate world, she decides to become an immigration lawyer and decides to fight for immigrants' equal rights to justice. As a result, she joins SPLG, an immigration law firm in California and ultimately ends up with the case of Ahmad. Ahmad is a visitor from Iraq, who despite having a valid entry visa is apprehended at that San Francisco airport on pretext of immigration violations. In fact, the actual motive of his arrest was that he was suspected of being a terrorist. While Ahmad's tale is not the usual situation of most immigrants, it is still a reflection of the misfortune of many Muslims and Middle Easterners trying to enter the US post September 11, 2001. The book not only shows the hardship of these individuals and their lawyers but also the challenges faced by American Muslims or people who look like Muslims.

On a positive note the book praises the triumph of the American legal system and the US Constitution over arbitrary and capricious abuses of power. So one might think that Shah Peerally is trying to put all his hopes and dreams about a better world into a work of fiction. But in fact, through this he is actually trying to depict an a lesser known unique facet of the post 9/11 US immigration system including its strength and its flaws.

The editorial reviews of the book say it all:
Simon Barett From Blogger News review: "...I will however make some general observations. The author clearly understands the subject, and that makes this a great, if too short read. What I enjoyed are some of the nuances, the minor asides. There is absolutely no doubt in my mind that the life of being a refugee is not an easy one. Ahmad is lucky, he has people to help him, even better, people from other cultures that join for the common good..." ; and Jack Magnus from Readers' Favorites gives it a 5 Stars: "...I am so impressed by The Immigration Lawyer. This legal thriller by Shah Peerally is entertaining and highly inspirational -- and not only for young adults. I'd recommend it for anyone who wants to make a difference, especially law students and young lawyers who aren't quite sure about their career plans. Peerally sets out the procedural steps by which Sarah helps Ahmad simply and eloquently, and he makes accessible what has always seemed to me to be a very complicated branch of law. 'The Immigration Lawyer' also explores the all-too-real plight of immigrants in the U.S. after the 9/11 attacks who have been the victims of hate-crimes, and it does all this in an entertaining graphic novel format. The Immigration Lawyer is remarkable and a definite must-read."

"The Immigration Lawyer: Asylum" is available in print priced just $9.99 from http://www.amazon.com/The-Immigration-Lawyer-Asylum-Volume/dp/0615783783/ and is also available as a Kindle download priced $3.07 (Free on KDP Select on specific days)

An audio version will soon be available on www.audible.com.

The Book The Immigration Asylum - listen to the audio promo.

The commercial made by KLOK 1170 AM radio. 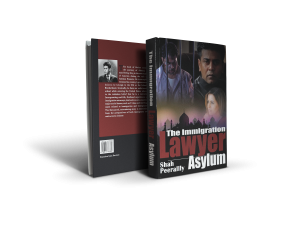 Shah Peerally’s new novel, The Immigration Lawyer Asylum has something for everyone; there is romance, suspense, comedy and drama. The story is inspired by a true story and is about a man from Iraq who is a suspected terrorist and wrongfully held by the FBI in the United States.