Power & Industry, the most Epic gifting and entertainment Lounge during the Sundance Film Festival, has announced the latest additions to their 2015 Indie Lounge line up including gifting partners, entertainment, and Aerial Drones. 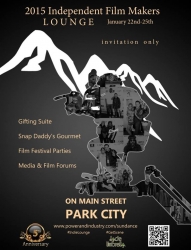 Film Festivals are celebrated for their exquisite gifting suites and entertainment lounges, celebrities and filmmakers are found commenting, not about the greatest film they’ve seen, but rather the collection of “SWAG” from various lounges or social parties. “SWAG” has become synonymous with film festivals and award shows all over the globe. So how does the Indie Lounge raise the bar? In celebration of their 5th year at the Festival, the Indie Lounge is gifting aerial cinematography drones to attending filmmakers! “We hope to give independent filmmakers the opportunity to compete on a larger scale with more creative and aerial filming,” Rob Joseph, Power & Industry’s Director of Special Operations said. “These Tablet controlled drones have revolutionized the industry and helped numerous indie filmmakers up their production value. What better place than the Indie Lounge to give them away.”

Save the Date Invitations for the Indie Lounge begin October 4th, 2014. #getscene