"Crabapple - A True Story of Hope & Miracles" – As an eBook: How Nine Year-Old Boys Challenge Death; Featured on Amazon.com and BarnesandNoble.com

Anthony Dallmann-Jones bursts onto the literary scene again, publishing "Crabapple - A True Story of Hope & Miracles" and – for the first time – publishes an eBook conveying a heartwarming story which veers away from the usual memoir format. 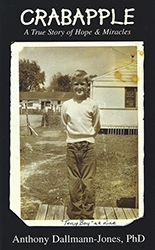 Fond du Lac, WI, November 05, 2014 --(PR.com)-- Anthony Dallmann-Jones, a published author of 12 books, including "Shadow Children" and "Fixing Public Education," has published his story of a very special year as a showcase for understanding nine year-old boys, a unique year because it is about this time that a change in brain development seriously begins to challenge current ways of thinking and behaving.

“Nine year-old boys are a special breed,” Dr. Dallmann-Jones explains. “Around the age of nine the brain’s gray matter actually increases…and with that comes the ability to think abstractly for the first time. It is a new world and with it comes an awareness of their own possible mortality – which must be defied and tested – also for the first time.”

What makes "Crabapple" unique – actually bizarre?
The story centers on Tony Boy, a blonde, freckled kid heading in the wrong direction in Post-WWII Alabama. The predictable trajectory for a boy from a dysfunctional family is interrupted by a large and mysterious woman. She enters his life by pulling him into her small house adjacent to his Tuscaloosa elementary school after catching him stealing her backyard crabapples. This chapter in Tony Boy’s life might be called, ‘Let the Life-Changing Lessons Begin!’

In a series of return visits to ‘The Witch’s Cottage’ Tony Boy experiences an incredible new world – a world he may have never known had not this woman, who has a seriously dark past of her own, taken him under her wing. This is Dallmann-Jones' first eBook http://tinyurl.com/paq54kx
Contact
Anthony Dallmann-Jones
Anthony S. Dallmann-Jones
920-251-2052
FixingPublicEducation.com