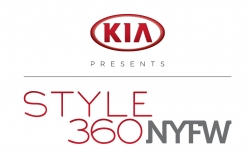 New York, NY, August 21, 2015 --(PR.com)-- Annual fashion week showcase STYLE360, produced and owned by special event and PR firm, A-list Communications, is announcing its New York Spring/Summer 2016 dates of September 14 – 17, 2015 as well as one of its most high profile collection of designer fashion shows and parties to date. In its 11th year, STYLE360 now becomes one of the longest running and successful multi-day fashion platforms during New York Fashion Week.

Additional news for the season includes Kia Motors stepping in as Title Sponsor, which will rebrand the program officially as “KIA STYLE360” and debut a new logo as the program enters its second decade this September. Kia will utilize this week of fashion to promote the all-new 2016 Optima sedan with integrated activations, on-site car displays and a fleet of vehicles available to transport fashion editors, celebrities and VIPs to and from the fashion shows and events. The Optima has been Kia’s best-selling vehicle in the U.S. for three consecutive years, and the passionately designed and obsessively crafted new model is poised to continue that success through a blend of European-inspired styling, a refined and sophisticated interior and significant improvements in ride and handling. As with its predecessor, the all-new Optima will be built at Kia’s plant in West Point, Georgia, with sales scheduled to begin in the fourth quarter of 2015.

This September’s line-up of high profile fashion shows and festivities for KIA STYLE360 lists as follows:

In more detail, the schedule kicks off on Monday, September 14th with new media partner Us Weekly celebrating Fashion Week in collaboration with KIA STYLE360 held at Row NYC hotel. This intimate red carpet fête is a can’t-miss affair in the always stylish Us Weekly fashion, with music by film and fashion’s top DJs, Michelle Pesce and Alex Merrell of Nona Entertainment.

The KIA STYLE360 fashion shows will again be staged at the two-level Metropolitan West located at 639 West 46th Street and kick-off with a dual runway presentation on September 15th by Addition Elle presenting its most-talked about collection, the Ashley Graham Lingerie Collection, as well as its newest addition, the Nadia Aboulhosn Collection and select Holiday looks from Love and Legend and Michel Studio. Addition Elle is recognized as the trendsetter in the plus size market and the new line with supermodel, designer and body activist, Ashley Graham, who will also be walking the show, is already generating significant pre-fashion week buzz. Look for a social media stream of the show on Addition Elle’s Periscope channel (@additionelle).

At 3pm, Serena Williams will be switching her footwear from her US Open matches the week before at neighboring Flushing Meadows, for stiletto heels and present her 2nd annual Serena Williams Signature Collection by HSN fashion show. Last year’s STYLE360 fashion show was a grand-slam success with Vogue Editor-in-Chief, Anna Wintour, and other VIPs sitting front row. This year HSN and Serena Williams have several big show surprises in the works including a live stream of the show on HSN.com and special guest appearances to be announced. Closing out the day will be television and fashion star Angela Simmons embarking on a special fashion rebrand and ready-to-wear collection with the Harlem Globetrotters, including a special commemorative uniform in celebration of the iconic basketball team’s 90th anniversary of entertaining families around the world.

The next day of fashion shows on September 16th, kicks off with designer Raul Penaranda’s #LoveWins show. Only 2 years after launching his debut collection at Mercedes Benz Fashion Week, Raul Peñaranda was declared by Forbes magazine as one of the fastest growing fashion entrepreneurs to come out of the small business industry with his 100% USA manufactured ready to wear fashion line for women. At KIA STYLE360, Penaranda will unveil an elegantly opulent collection featuring nearly 40 looks. In addition, Penaranda has secured the rights to accessories and show case his amazing design by styling with the gorgeous creations of TV personality Gretchen Christine Rossi, who’s Handbag collection “Gretchen Christine” is entering its 8th year after launching to huge success with Style 360 during New York Fashion week in 2009.

At 3pm will be the debut New York Fashion Week runway show for The Adam Levine Collection presented by Shop Your Way Brands/Kmart with looks inspired by the Maroon 5 front man himself. From All-American classic tees and denim to bold button-ups and leather jackets, the Adam Levine Collection has everything needed to complete a cool, laid-back lifestyle. Special performances and surprise guests are all in the works for this hot fashion week ticket.

Closing with the final runway show will be Tumbler and Tipsy by Michael Kuluva who last showed at STYLE360 with a performance by Cher Lloyd and early career runway appearances by today’s top supermodel, Kendall Jenner. Anchored by the creative mind and brilliant talents of professional figure skater turned fashion designer, Michael Kuluva, Tumbler and Tipsy is not only reworking, redefining and revamping the world of fashion but is taking it over with his sexy yet stylish brand. As is the norm for this annual fashion spectacle, his titled "Candy & Champagne" Spring/Summer 2016 Runway Show features a mash up including Brittny Gastineau, recording artist, Ivy Levine, Ava Capra, Tarik Lakehal, Jelly Belly Couture, Reading Rainbow,Pop Rocks, Cherrytree Records and PoolSide Collection.

Concluding on Thursday, September 17 at 8pm, KIA STYLE360 wraps with a fashion presentation party showcasing Kristin Cavallari By Chinese Laundry. Kristin will share some of her favorite 2015 looks and a sneak peek of her 2016 collection, prior to the official preview in October. In addition, Kristin's also sharing an advanced look at the cover of her upcoming book, "Balancing on Heels" debuting in 2016. The closing event will take place at Row NYC hotel located at 700 8th Avenue.

Sponsors generously supporting the September 2015 season include several returning partners: Not Your Mother’s® hair care will style all fashion shows with products by lead stylist Michele Carrillo and her stylist team. Renewing cosmetic partner James Vincent will be returning as the key makeup artist with the official makeup partners, Limelight by Alcone Company and MustaeV U.S.A., a prestigious Korean artistry make up brand. In addition, COMPEED®, the #1 selling blister product in Europe, is launching in the U.S. and will be offering foot rubs and samples of COMPEED® Blister Cushions to high heel fatigued guests and models.

The renewing official hotel and after-party partner is Row NYC located near the KIA STYLE360 fashion pavilion at 700 8th Avenue. The art-driven, New York-centric hotel will host the program’s celebrity and VIP guests as well as the STYLE360 closing party. Row NYC is also offering four exclusive tickets to a STYLE360 show (winners’ choice) and four invitations to the closing event hosted at the hotel. New sponsor, Autotrader, the leading resource for car shoppers and sellers, will also sponsor and highlight with its on-site “Autotrader Color Studio” and offer manicures to guest with paint choice selections matching the hot car colors of the year. The official footwear sponsor of the program, Sperry, will be presenting its classic and new collections at KIA STYLE360 this September including on the runway for shows including The Adam Levine Collection and Tipsy and Tumbler by Michael Kuluva. Lastly, Us Weekly joins as the official media partner who will bring KIA STYLE360 to a wider base of fashion fans as the go-to source for celebrity-inspired fashion. Capturing current, of-the-moment trends favored by Hollywood and beyond, the brand serves not only as the authority on what the stars are wearing, but informs readers on how to get the looks. From red carpet occasions to street style, Us Weekly’s audience takes their own fashion cues from every photo and article seen in its pages and online. Other sponsors currently in negotiation will be announced at a later date.

“For the last 10 years, STYLE360 has been a trusted home for celebrity designers and top brand name designers. I’m excited about the current climate of the Fashion Week industry and hope all the hard work and contributions our team, our designers and sponsors make every season help get a brighter spotlight shown on it by the fashion industry. And while we have a shorter week’s schedule than others, we remain open to increasing our offering if designer demand drives the need,” states Executive Producer & Owner, David Manning, A-List Communications.

For more information on this season’s designers, to get inside access, view runway trends, special promotional offers, and watch behind the scenes celebrity interviews as well as live streaming from the runway, please visit style360nyfw.com. Twitter @NYFWSTYLE360 and Facebook @STYLE360.
Contact
A-List Communications
David Manning
877-402-5478
www.a-listcommunications.com