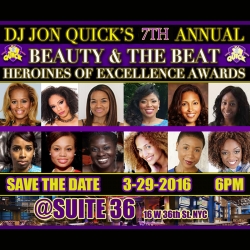 "Its always an honor to acknowledge these phenomenal women of color in the name of charity. With 12 honorees, this year's event will be the biggest one yet," said DJ Jon Quick, the event's creator. All proceeds go to "The Urban Resource Institute" and "The Hip Hop Loves Foundation."

A who's who of sponsors and supporters include Fresh Direct, NV Magazine, Uptown Magazine and Doris New York Haircare products.