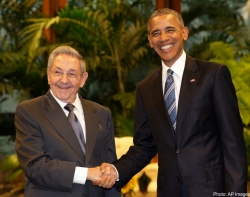 Washington, DC, March 21, 2016 --(PR.com)-- Today President Obama announced a historic commitment to bilateral study abroad through a dedicated U.S.-Cuba Innovation Competition as part of his signature education initiative, 100,000 Strong in the Americas Innovation Fund. The $1 Million contribution from the Cuban-American community to increase bidirectional student exchanges will foster a new era of relations between the United States and Cuba.

“Thanks to the generous support of the Cuban-American community, I can announce that my 100,000 Strong in the Americas initiative will offer new opportunities for university students to study abroad, more Americans at Cuban schools and more Cubans at U.S. schools,” said President Obama during his meeting with Cuban President Raul Castro.

With this generous support, the 100,000 Strong in the Americas Innovation Fund will sponsor competitions in 2016 and beyond to advance student participation in entrepreneurship. Cuba-specific rounds will support bidirectional student exchanges across a wide range of areas of mutual interest, such as agricultural management, entrepreneurship in business and social innovation, TIC, environmental and sustainable energy, language learning, international trade and development, study abroad infrastructure, and cultural collaboration, while helping overcome decades of misperceptions and mistrust.

The new $1M commitment to President Obama's historic initiative announced today is already mobilizing additional support. CAF Development Bank of Latin America has agreed to expand its existing support for the President's 100,000 Strong in the Americas initiative by joining the U.S.-Cuba Innovation Competition.

“Partners of the Americas is so proud that 100,000 Strong in the Americas will play a key role in strengthening the relationship between the U.S. and Cuba,” said Steve Vetter, President and CEO of Partners of the Americas. “I thank Enrique Garcia, Executive President and CEO of CAF Development Bank of Latin America for already agreeing to join this important initiative, along with the generosity of other supporters, which enables us to implement this more inclusive approach to building partnerships between U.S. and Cuban higher education institutions toward the goal of bring our hemisphere closer together.”

“Having been fortunate to visit Cuba this past fall, a freedom currently denied to many American citizens, I witnessed first-hand an intense desire for U.S. and Cuban higher education institutions to collaborate,” said Marlene M. Johnson, NAFSA Executive Director and CEO. “Most study abroad programs conducted by American institutions in Cuba closed their doors after executive action in 2004 instituted severe restrictions on academic travel to Cuba, abandoning one of the only avenues of understanding and collaboration that existed between our two countries. Today’s expansion of the 100,000 Strong in the Americas Innovation Fund to include U.S.-Cuba student exchange enables our two countries to begin rectifying this 50-year failed policy.”

The 100,000 Strong in the Americas Innovation Fund is a public-private collaboration of the White House, U.S. Department of State, Partners of the Americas, and NAFSA: Association of International Educators that was announced by Secretary of State John Kerry in January 2014. Since then, 70 Innovation Fund grants have been awarded to teams of 153 higher education institutions from 19 countries in the Western Hemisphere. Learn more at www.100kstrongamericas.org.

The mission of Partners of the Americas is to connect people and organizations across borders to serve and to change lives through lasting partnerships. These partnerships create opportunity, foster understanding, and solve real-life problems. Inspired by President Kennedy and founded in 1964 under the Alliance for Progress, Partners is a nonprofit, non-partisan organization with international offices in Washington, DC. Learn more at www.partners.net or via Twitter @partnersamerica.

With nearly 10,000 members, NAFSA: Association of International Educators is the world's largest nonprofit professional association dedicated to international education. Learn more about our work at www.nafsa.org and www.connectingourworld.org and on Twitter at @NAFSA and @ConnectOurWorld.