Florida’s Toxic Algae Blooms: Could This Happen in North Carolina?

The recent toxic algae problems in Florida have generated widespread media attention and led many to ask “what’s going on?” The blooms on the east coast of Florida began in May as algal blooms in the nutrient enriched Lake Okeechobee, then moved down the St. Lucie River to the estuary and ultimately to Florida’s “Treasure Coast” as a result water releases by the Corps of Engineers. Could the same thing happen to North Carolina's coastline? It's possible. 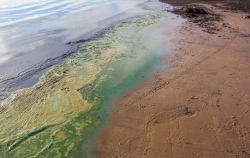 Mark can be reached at msenior@wkdickson.com

The recent toxic algae problems in Florida have generated widespread media attention and led many to ask “what’s going on?” The blooms on the east coast of Florida began in May as algal blooms in the nutrient enriched Lake Okeechobee, then moved down the St. Lucie River to the estuary and ultimately to Florida’s “Treasure Coast” as a result water releases by the Corps of Engineers. This release was necessary to lower water levels in the lake due to heavier than normal rains. The growing algal bloom resulted in the governor recently declaring a state of emergency in four counties after the bloom reached beaches and created a health concern for swimmers. While there have been no reports of serious health issues, the aesthetics and odors associated with the decaying algae have hurt the tourist industry and remain a concern.

What is an algal bloom?
Algal blooms are associated with a variety of aquatic organisms capable of using photosynthesis for energy. They are typically labeled as blooms when certain types of potentially toxic or nuisance algae are present. These include Blue Green algae or cyanobacteria (responsible for the current problem on the east coast of Florida) and “Red Tide” algae or dinoflagellates (such as “Karenia brevis” responsible for algal blooms in the Gulf of Mexico as well as “Alexandrium fundyense” causing red tides along the Atlantic Coast). Some algae produce odors and/or impart disagreeable taste to drinking water. Others such as cyanobacteria can produce microcystins which can cause nausea and possibly liver damage while dynoflagelates can produce neurotoxins which affect the brain and nervous system. Algal blooms also pose a risk to fish and other aquatic organisms when the algae die and the decaying process consumes much of the oxygen they need to live. Blooms can be naturally occurring, but they seem to be on the rise. Their impacts are also growing as increasing populations migrate to desirable waterfront destinations.

Is there a possibility of something similar occurring in North Carolina?
While algal blooms are not common in North Carolina and reports of illness are rare, the NC Department of Health and Human Services does track them and fish kills and health concerns associated with the dinoflagellate Pfiesteria were widely publicized in the 80’s and 90’s. Algal blooms occur in as many as 20 states. Red Tides frequently impact beaches along much of Atlantic coast, the west coast of Florida, Texas, and the Gulf. Blue Green algal blooms impacted a 636-mile stretch of the Ohio river in September, 2015, and residents received a warning to avoid drinking tap water in Toledo, August, 2015, due to a toxic algal bloom in Lake Erie. Increasing pollutant and nutrient loading may increase their distribution, frequency, and magnitude.

Is this something new?
Algal blooms have been around for many years both along the coast and on inland lakes in the United States and are almost an annual event in Lake Erie. They are also not uncommon in other countries. In the summer of 2015, China experienced a 7,500 square mile bloom in Qingdao which has reoccurred annually and has become known as the “green tide.” One of the largest blooms on record occurred last year along the west coast from California to British Columbia resulting in closure of crab and clam fisheries. NOAA even has a website dedicated to the tracking and notification of Harmful Algal Blooms (HOB).

What influences algal blooms?
Understanding and predicting algal blooms is not an exact science, but nutrients (primarily nitrogen and phosphorus), sun, warmth, and rainfall seem to be triggers.

Will the likelihood increase?
Continuing development and resulting increases in both stormwater runoff and wastewater discharges from both treatment plants and septic tanks combined with increased fertilizer use in agriculture and growing livestock industries relying more on concentrated animal feeding operations (CAFO’s) will likely result in additional nutrient enrichment made even worse by a disproportionate increase in population along coastlines. The predications of climate change may provide greater opportunity for more blooms through warmer average temperatures and more frequent heavy rain events to wash nutrients into the ocean.

What can be done to reduce the chances of algal blooms?
For Florida, the short term solution was to halt discharges from Lake Okeechobee. However, such a focused solution is not widely available in other regions and only addresses the immediate problem. Long-term solutions will likely require reducing the loading of nitrogen and phosphorus in both wastewater discharges and stormwater runoff. Measures to address nutrients at their source, such as reducing fertilizer use and removing phosphorus from laundry detergents, can and have resulted in effective and low cost reductions. Tools for wastewater reductions include new technologies to improve treatment and installing new infrastructure to divert wastewater from private septic systems and “package plants” to more effective and often better managed municipal waste water treatment plants. Stormwater-based solutions include the implementation of non-structural practices such as stream buffers along with the design and installation structural stormwater pollution controls such as retention ponds, constructed wetlands, and rain gardens (bioretention) on agriculture, new development, and redevelopment. Stormwater retrofits of existing development must also be considered in order to reduce existing nutrient loads. Their application is especially critical in coastal areas and around estuaries and lakes where the pollutant load is delivered directly to the impacted waterbody. The impacts of stormwater pollution and the need for controls are already being felt in coastal communities in the form of beach and shell fishing areas as a result of health concerns due to bacteria and pathogens.

Algal blooms are not new, may happen almost anywhere, and occur naturally, but it appears that their frequency and magnitude are on the rise. While their causes are not clearly understood, there is growing belief that excess nutrients may trigger blooms. Their presence disrupts recreation and tourism and can even pose significant health threats. For these reasons and many others, it is contingent upon us to diligently pursue reducing pollutant loading from wastewater discharges, septic systems, and from stormwater discharges associated with agriculture and urban areas.

Company Information
WK Dickson is a multi-disciplined consulting firm specializing in total community infrastructure solutions including: airport planning and design; environmental and water resources engineering; community planning and site development; and geospatial technology. Our goal is to help communities improve the lives of its citizens through sound, ecologically responsible design principals. The firm has been headquartered in Charlotte, North Carolina since its founding in 1929 and has steadily grown to operate eight regional offices strategically located throughout the Southeastern United States.
Contact
WK Dickson & Co., Inc.
Kraig Kern
704-334-5348
www.wkdickson.com