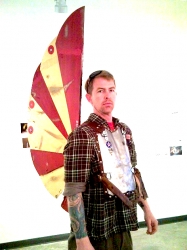 Collier received his BFA from George Mason University, Virginia, in 2012 and his MFA from Florida State University in 2016. Collier works as an interdisciplinary artist, employing photography, social practice, and sculpture to explore the intersection of ideas revolving around place, history, and contemporary culture. His work has been shown in galleries in Washington D.C., Virginia, and Florida. He lives in St. Petersburg, Florida, where he splits his time between his studio practice, the development of his start-up Aloft Aerial Imaging, and working as a residential remodeler.

“Art has helped me move on from things you do in war, that aren’t permissible in society,” said Collier, whose reflects on war, combat, and military themes. His residency will allow him to take inspiration from the historic battlefield of Gettysburg and how it reflects on the battlefields and soldier life today.

Collier arrives on January 15, and will do a “meet the artist” event and display at the Gettysburg National Military Park Museum and Visitor Center on Feb. 11, from 11 a.m. to 1 p.m. This event is free and open to the public.

"Gettysburg inspires so much passion in our visitors today, and the Artists-in-Residence are providing new connections to people from all walks of life," said Ed W. Clark, superintendent of Gettysburg National Military Park. "Our Artist-in-Residence programs are engaging new audiences and connecting with visitors through the power and the passion of art."

The National Parks Arts Foundation (NPAF), a 501(c)3 non-profit, has expanded its Artist-in-Residence program Service at Gettysburg National Military Park to include 12 artists over 12 months. The Gettysburg Foundation supports the Gettysburg program which has become a model for artist residencies in all of the national parks. The NPAF has introduced four programmatic themes to the residencies in 2017 which will alternate:

U.S. Military Veteran Artists: During January, July and November 2017, Gettysburg’s Artists-in-Residence will be U.S. Military Veterans, bringing a unique perspective to arts in the park. All deadlines for all 2017 applications are next week January 20th.

Alembic Arts (New Media): This programmatic theme speaks to many varied and mixed media including film image, technologies, augmented Realities, Virtual Realities and any and all combinations with these in themselves of combining classic art media with such "new media."

Arts Revolver: Open to any and all artistic media including cross-overs or hybrids with any of the other programmatic themes.

LiterAudiArts: NPAF’s most fascinating AiR programmatic theme focusses on many and all Linguistic, words, sounds, song and music. A few examples of this are poetry, screenplays, spoken word, environmental recordings, sound art, wall of sound experimentation.

NPAF selects any sort of artist for national park residencies, from traditional landscape painters, photographers, to performers, installations, films/video, as well as writers, poets, sound artists, and new arts media. More information about these opportunities is available at www.nationalparksartsfoundation.org. * The US Military Veterans Artist in Residence Program is Supported by ActiVets "healing physical and psychological wounds in the solitude, peace, and beauty of our National Parks.".

Your Invitation to the National Park event.