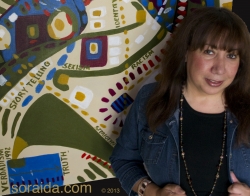 Seneca Falls, NY, February 28, 2017 --(PR.com)-- Established in 1980, The Women’s Rights National Historical Park consists of four major historical properties, including the Wesleyan Methodist Church – the site of the Seneca Falls Convention, where the first women’s rights convention was held and where Elizabeth Cady Stanton demanded the right of women to vote. Stanton, an American suffragist, social activist and abolitionist was one of the leading figures of the early women’s rights movement – along with Jane C. Hunt, Lucretia Mott, Martha Coffin Wright, Mary Ann M'Clintock and other women’s rights activists.

Born in Harlem NYC, Soraida Martinez is known for creating the art style of Verdadism. Since 1992, the artist has been speaking out against the prejudice that still pervades America society. For 25 years now, the artist has been creating paintings and writing social commentaries based on her personal life experiences with racism, sexism and stereotyping. The art of Verdadism confronts the societal issues that continue to disenfranchise women, Latinos, African-Americans and the individuals alienated by mainstream American society. According to Soraida, “the goal of Verdadism is to foster self-empowerment, hope, justice and social change. Xenophobia is learned so it can be unlearned.”

An important contemporary award-winning artist, Soraida’s is recognized for her innovative artistic achievements. She has been chosen by the U.S. Department of State as one of the 15 most prominent Hispanic Americans in the arts shaping the U.S. cultural scene. She has also been selected by Huffington Post as among the 10 best Latino artists in the United States. Verdadism paintings have been featured in college and university textbooks on Latino studies. From 1996 to 1999, the artist served as a member of the New Jersey Council on the Arts. In 1999, the artist wrote a book on the art and philosophy of Verdadism entitled Soraida's Verdadism: The Intellectual Voice of a Puerto Rican Woman on Canvas; Unique, Controversial Images and Style.

According to Soraida, “Verdadism means to empower your life with your own truth and go for it. I was labeled a feminist just because I promote women’s rights. I have always believed in social justice and equality. I just can’t believe that society has become more intolerant. We are living in the worst of times, but we have to be positive to one another and work together. We have to make sure we are helping each other out, not just marching. Women working together make us stronger and more powerful.”

Original Verdadism paintings and framed giclee fine art prints will be on exhibit from March 1 to March 24, 2017. The reception for the artist is Saturday, March 4, 2017, from 2-4PM. All are welcome to meet the artist and have a dialogue on women’s rights, race relations and social justice.

The reception for the artist will be held at the Visitor Center, 1st Floor Gallery, 136 Fall Street, Seneca Falls, NY 13148. Admission is free. For more information, see the calendar events at nps.gov/wori or call Ashley Nottingham at 315-568-2991 extension 5000. For information on Soraida and the art of Verdadism, see soraida.com.
Contact
Verdadism Art Gallery
Soraida Martinez
856-346-3131
http://www.soraida.com 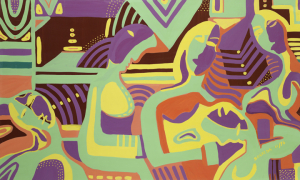 "Women tend to be negative towards other women. Many women are very hard on other women, as if they themselves are misogynistic. I'm appalled that a large number of women don't want to help each other. We are not going to progress and gain power in this world unless we all start helping each other. 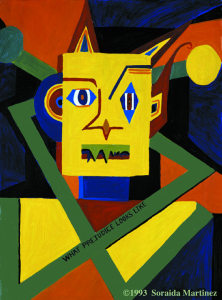 I always thought that prejudice never looked evil but idiotic, because prejudice is a pre-conceived idea and is not logical; therefore, prejudice is incoherent and stupid. The figure in What Prejudice Looks Like embodies the awkwardness and the unbalanced psyche of the prejudice human being.