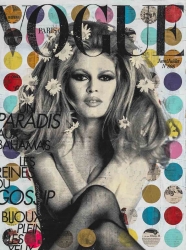 Though their work differs greatly in terms of technique, subject, and medium, Stallman and Mars share an interest in creating dynamic compositions that incorporate energetic forms, patterns, and colors. LRFA’s first exhibition featuring the work of Robert Mars, "Iconic Patterns," will be on view through December 30, 2017.

Based in the Pacific Northwest, artists Stephen Stum and Jason Hallman (collectively known as Stallman) meld their creative energies to produce mesmerizing works that fall somewhere between the categories of painting and sculpture. Since 2012, they have collaborated on their Canvas on Edge series, which molds painted strips of canvas into compositions that shift in color and form depending on the viewer’s perspective. The strips’ painted edges gather to create elevated line drawings that recall cellular processes and organic forms drawn from nature.

Represented in five states, Stallman have exhibited their work in such far-flung cities as New York, Seattle, Chicago, Miami, and Laguna Beach, California. Recently awarded the Carol Duke Artist Award of Excellence from the Bellevue Art Museum ARTSfair, their work has also been featured in many publications, including Vanguard Seattle, My Modern Met, LUXE Interiors + Design, and Fahrenheit magazine.

A graduate of Parsons School of Design and currently based in Connecticut, Robert Mars has exhibited his work worldwide in such cities as Munich, Tokyo, Amsterdam, London, New York, Los Angeles, and Paris. In 2016 the Evansville Museum of Art in Indiana hosted a solo exhibition of his work, which is also permanently held in the collections of the Coral Springs Museum of Art, the International Museum of Collage, and the New Bedford Art Museum.

With over 25 years’ experience in the industry, gallery owner, Laura Rathe, started her career working as a private art dealer before establishing Laura Rathe Fine Art (LRFA) in 1998 in Houston, Texas. LRFA now operates out of two locations in Houston and a third gallery in Dallas on Dragon Street, the city’s premiere arts district destination. Since the gallery's inception, LRFA has established itself as a leading contemporary art venue, offering an impressive range of exhibitions and programming to its patrons in both cities.