The recently published novel "The Chords of War," offers a unique view of a young man, not a war enthusiast but a rock-n-rock guitarist, who finds himself on the front lines during the surge in Iraq 2006-07. It's based on the true story of Samuel Gonzalez, Jr. 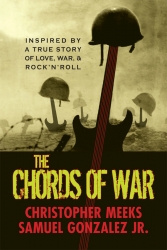 Published in late September, the new novel “The Chords of War,” is quickly receiving top reviews from professional reviewers and readers alike. The novel, inspired by Sam Gonzalez’s true story, follows punk rock teenager Max Rivera from Florida, who seeks purpose as he tries to understand why his life always teeters between music and mayhem. After he's kicked out of his band on tour, he joins the Army to change his life. It's after 9/11, and he finds himself under fire in Iraq, part of the surge in Baquabah. In order to deal with his teen angst and raging hormones among daily patrols, coordinated battles, and women fighting alongside him, Max creates a new band with soldiers. Will Max and his friends make it?

“The Chords of War may be destined to have the impact of All Quiet on the Western Front as the defining novel of the Millennials’ war in Iraq. It has already made my 2017 Top Three list of books.”
--Linda Hitchcock, Midwest Book Review

“Wow what a book. This is destined to become an instant classic. The authors really capture the essence of the war in Iraq and what it is like to be a young soldier in the midst of such horrors. Couldn't put this book down. I now have a whole new perspective on the war.”
-- Tony Walsh, NetGalley Reviewer

“The Chords of War is one of those hidden gems that you stumble across when you least expect it.The writing is superb. Nothing feels glorified or overdone. It’s filled with stories of losing iPods in latrines, losing girlfriends, losing friends to madness. The writing style really works well, including the beginning which flips back and forth between life in Florida as a musician and basic training and tours through the landscape of Iraq. Definitely worth reading.”
-- David Wilde, NetGalley Reviewer

“The writing of the war in Iraq is some of the best war writing I have read of wars in Iraq and Afghanistan. There are times in this book when I was nearly brought to tears by the events and eloquence of the writing.”
--Craig Stephans, vet and Anglican priest, North Carolina

“Strong writing, acrid veracity of language and emotion, this little book is an important one – one we all need to read for ever so many reasons because the content affects us all, now and always. Highly recommended.”
--Grady Harp, San Francisco Review of Books

This is Christopher Meeks’ seventh book of fiction, which includes The Middle-Aged Man and the Sea and Love at Absolute Zero. He teaches English and creative writing at Santa Monica College and at the Art Center College of Design in Pasadena. Samuel Gonzalez, a former student of Mr. Meeks, will have his first feature film, “Railway Spine,” premiere on Netflix in January. He teaches filmmaking at the University of North Carolina in Raleigh. He collaborated with his former professor after serving in Iraq to bring this story to light.

This year, Veteran’s Day will be celebrated on November 10. This book shows you the reality of what young men and women, our most recent vets, have gone through. Christopher Meeks and Samuel Gonzalez, Jr. are available for speaking.
Contact
White Whisker Books
Christopher Meeks
310-493-4576
www.WhiteWhiskerBooks.com

Press release about "The Chords of War," a new novel