The Garden City Hotel is excited to host the Fall Sports Players Ball on Thursday, September 13. The event starts at 6 pm at the Patio Bar and will be celebrating a night of sports featuring a silent auction with autographed sports memorabilia and proceeds will be donated to the USO of Metropolitan New York. Tickets are $25 and include two tap beers. 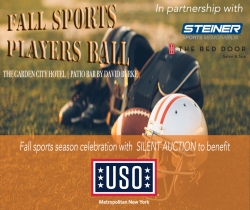 Garden City, NY, September 12, 2018 --(PR.com)-- Fall foliage isn’t the only thing to touch down this autumn; so are football wins, basketball dunks and hockey pucks. To celebrate the season, on Thursday, September 13, 2018, from 6pm - 10pm, The Patio Bar by David Burke at The Garden City Hotel will host a special evening with a silent auction of sports memorabilia.

Approximately 30 autographed sports related items (provided by Steiner Sports) will be on display. Some of the items include:

In true David Burke form, The Patio Bar will provide benefits to your appetite. When guests donate $10-$49 they receive complimentary a delicious, chef’s choice appetizer at the event and a $50+ donations receives a hand rolled cigar and $25 voucher for a future visit to the new Red Salt Room by David Burke.

About Garden City Hotel
The iconic AAA Four Diamond-hotel, a member of Preferred Hotels and Resorts LVX Collection, was acquired by the Manhattan-based Fortuna Realty Group in 2012 and features 269 guest rooms including 16 suites. With more than 30,000 square feet of versatile event and meeting space, including the legendary Grand Ballroom, The Garden City Hotel is the premier choice for Long Island meetings and special events, and known for its world-class service. The Garden City Hotel also includes The Red Door Spa located on the lower level, for more information, visit gardencityhotel.com.

About the USO
The USO strengthens America's military service members by keeping them connected to family, home and country, throughout their service to the nation.

For over 77 years, the USO has been the nation's leading organization to serve the men and women in the U.S. military, and their families, throughout their time in uniform. From the moment they join, through their assignments and deployments, and as they transition back to their communities, the USO is always by their side.

Today's USO continuously adapts to the needs of our men and women in uniform and their families, so they can focus on their very important mission. We operate USO centers at or near military installations across the United States and throughout the world,including in combat zones, and even un-staffed USO service sites in places too dangerous for anyone but combat troops to occupy.

The USO is not part of the federal government. A congressionally chartered, private organization, the USO relies on the generosity of individuals, organizations and corporations to support its activities, and is powered by a family of volunteers to accomplish our mission of connection.