Novato and Sonoma-based SolarCraft announced the completion of a 161 kW solar energy installation at The Fountaingrove Club in Santa Rosa, CA. The celebrated Santa Rosa Country Club and Golf Course will reduce their operating costs by thousands every month and stabilize energy expenses for decades to come. 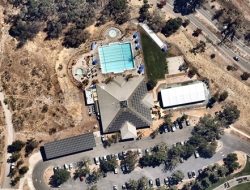 Novato, CA, October 26, 2018 --(PR.com)-- An inspiration in strength and resilience, the Fountaingrove property was devastated by the Tubbs fire of October 2017, including over 200 employees and club members that lost their homes. The golf club lost its clubhouse and maintenance facilities, including all its maintenance vehicles, while its athletic club, located near the club entrance down the hill from the golf facilities, survived intact. “We have one building left, and it’s going to be solar powered,” says Ron Banaszak, Fountaingrove General Manager.

Part of the solar photovoltaic system is mounted on the remaining athletic club building and part on a custom engineered solar shade structure, which now act as a protective carport and EV charging station spot for the Club and visitors’ vehicles. The solar power system consists of 446 solar panels and will produce 230,940 kWh annually, converting sunlight directly into electricity, offsetting almost 70% of the yearly PG&E electricity usage of the athletic club.

Also destroyed in the fire, was a 3,600 square-feet solar pool heating system installed by SolarCraft in 2005. Plans to rebuild the solar powered water heating system for their pool are also in motion as part of their sustainable long-range strategic plan.

During the life of the solar power system, over 189 tons of carbon dioxide generated by the Club’s operations will be eliminated every year. This impact is equivalent to removing air pollution produced by more than 10.5 million miles of driving over 25 years or the pollutants removed by 202 acres of trees in one year. The nearly maintenance-free system should pay for itself within 5-6 years, and last over 30 years.

About Fountaingrove Club
The Fountaingrove Club is Sonoma County’s only member-owned private facility with first-class services that leverage a plethora of outstanding amenities. The private club boasts an award-winning golf course designed by Ted Robinson Sr., a state-of-the-art fitness center, an infinity-edged swimming pool, a tennis center, gourmet dining, as well as ample space for events. The club itself is nestled in the hills above Santa Rosa, offering picturesque views of Fountaingrove Lake and, in the distance, the Coast Mountains.

SolarCraft is 100% Employee-Owned and one of the largest green-tech employers based in the North Bay for over 35 years. SolarCraft delivers Clean Energy Solutions for homes and businesses including Solar Electric, Solar Pool Heating and Battery / Energy Storage. With over 7,000 customers, our team of dedicated employee-partners is proud to have installed more solar energy systems than any other company in the North Bay. www.solarcraft.com.
Contact
SolarCraft
Kim Burnett
415-382-7717
www.solarcraft.com