An educational seminar honoring the memory of Tom Bass (1859 - 1934), a legendary African-American horse trainer, has been added to the 2nd Annual Day of the African Equestrian (DOTAE 2019) program. The 2019 Tom Bass Seminar will take place at the Tryon International Equestrian Center in North Carolina (USA) and will focus upon issues relating to diversity in Equestrian Sport. 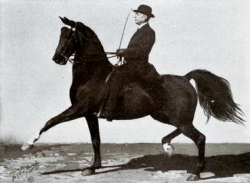 The 2019 Tom Bass Seminar will be held from 10:00 a.m. to 2:00 p.m. (Eastern Time) on the Sky Deck at the Tryon International Equestrian Center (TIEC) in Mill Spring, North Carolina (USA). The venue overlooks the George H. Morris International Arena. Discussions will focus upon Diversity in Equestrian Sport.

A legendary American Saddlebred trainer, Mr. Bass was born enslaved in Columbia, Missouri. He played a prominent role, both in the establishment of the American Royal Horse Show in Kansas City, and in the promotion of Mexico, Missouri as the "Saddle Horse Capital of the World." Highlights of his extraordinary career include championships at two world’s fairs and more than 2,000 blue ribbons. The Tom Bass bit, developed to give the rider control without causing pain to the horse, is still in use today. During his lifetime, Bass performed before luminaries such as Queen Marie of Romania, William Jennings Bryan, P.T. Barnum and U.S. Presidents Grover Cleveland, William McKinley, Theodore Roosevelt, William Howard Taft and Calvin Coolidge. His more prominent clients included Mr. Roosevelt, Buffalo Bill Cody, Anheuser-Busch executives Adolphus and August Busch and Will Rogers.

Admission to the Tom Bass Seminar is free to the public.

Confirmed panelists include: Julian Hyde, representing the Equestrian Federation of Jamaica; Stanford Moore, Publisher of Black Reins Magazine; Julian Seaman, Media Director of the Badminton Horse Trials (UK) and Hillary Tucker, Equine Services Specialist & Territory Sales Manager at McCauley Brothers - an Alltech company. Additional panelists will be announced in the run-up to the event. The seminar will be moderated by Melvin H. Cox, Managing Director of SportsQuest International, LLC and a Lecturer at the University of California, Santa Cruz.

Topics to be explored by panelists include:

- Demystifying horse sport - not for rich kids only

- Developing broad-based community support for equestrian activities at all levels

Entertainment at the DOTAE 2019 gala will be provided by Asheville, NC-based Katrina "Kat" Williams - an America's Got Talent finalist.

DOTAE 2019 will benefit educational programs administered by The AFRICAN CONNECTIONS Research and Education Fund, Inc. - including a two week International Summer Leadership Institute (ISLI), bringing together undergraduates from East Africa and the USA.

The first ISLI is scheduled to take place in the Summer of 2020, in Polk County, North Carolina (NC).

First presented in 2018 as a tribute to Africa-based athletes competing in the FEI World Equestrian Games and to pioneering African-American horsemen (active pre-1975), DOTAE 2019 will be staged as an adjunct to the CSI 5* (International Jumping Competition) being held October 16 – 20 at the Tryon International Equestrian Center. The TIEC tournament will include qualifying classes for the 2020 Olympic Games in Tokyo, (Japan).

Guests at the evening soirée will feast upon a variety of treats inspired by the cuisines of North Africa and the Americas – expertly prepared by chefs from the renowned Hare and Hound Pub of Landrum, SC.

Tickets for the 2nd Annual Day of the African Equestrian gala are available on-line through Brown Paper Tickets.com.

The AFRICAN CONNECTIONS Research and Education Fund, Inc. (www.africanconnections.com) was created in direct response to the numerous distortions, half-truths and omissions seen almost daily in the popular media regarding Africa, her people and the African Diaspora.

The principal mission of the organization is to illuminate, to educate and to provide a balanced viewpoint that celebrates genuine achievement and service to humanity.

SportsQuest International, LLC (www.SportsQuestInternational.com) is a privately held multimedia production company specializing in the development and promotion of sports related programming that presents positive, informationally rich themes. The company is widely known for its coverage of national and international level equestrian events.