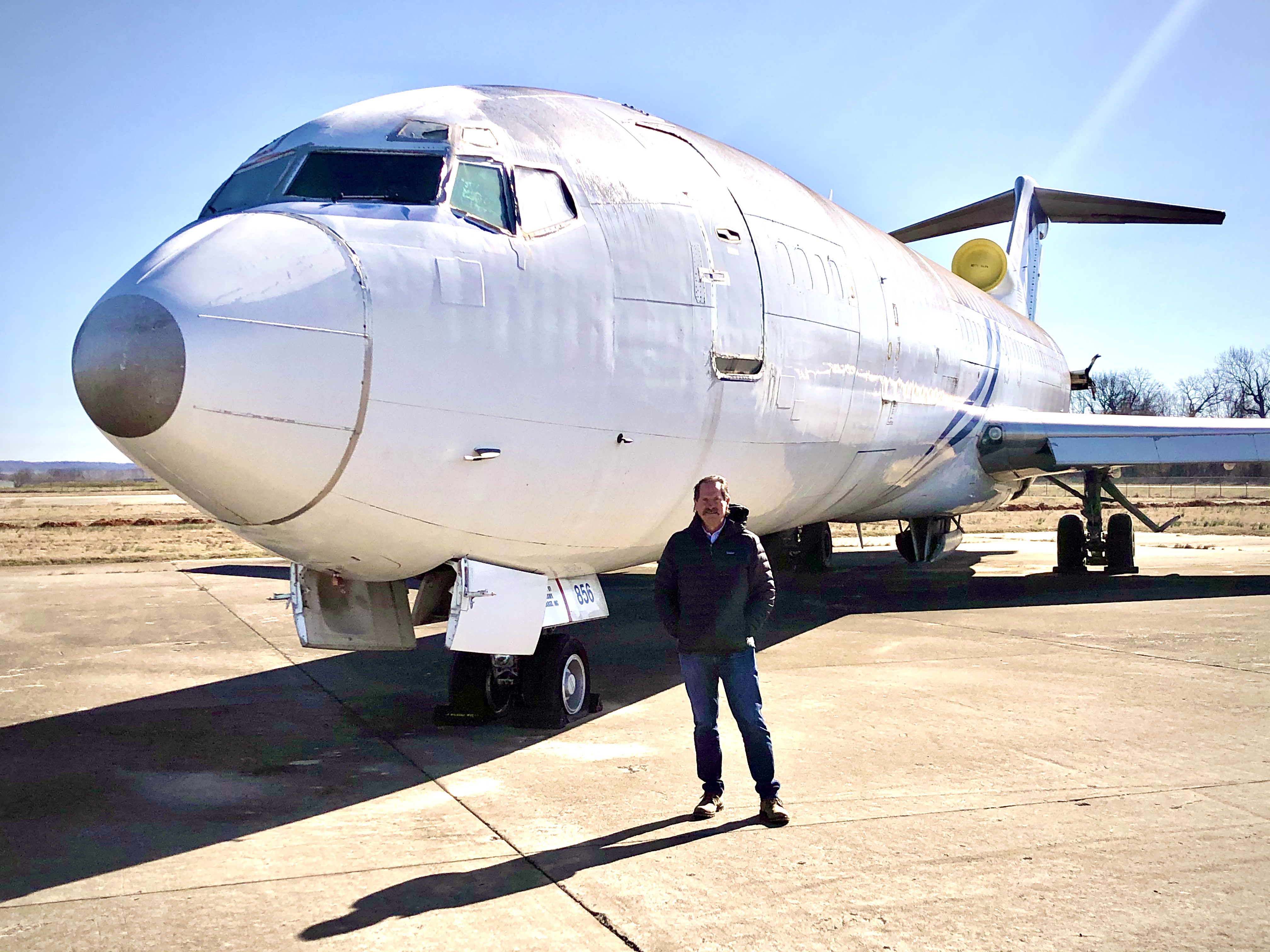 Accompanied by his daughter and son-in-law, Abby and Bill Pogorzelski, Howie first entered the back of the jet through an emergency door because "airstairs" located near the underbelly of the fuselage had no power. He said the jet looked as if “the pilot had just landed the 727, turned off the engines and simply walked away” in 2007.

“When I stepped into the plane, the first thing I saw were two oxygen bottles and a fire extinguisher still strapped in their holders,” Howie said. “Everything looked as if it was ready for the next flight. We were all surprised because of the good condition of the aircraft and how it acted as a time capsule from 2007.

“It was also amazing to find the auxiliary power unit (APU) still installed in the trijet. It was fully functional about 13 years ago when they parked it. If functional, the APU may allow us to power the brakes and steering for our testing purposes.”

The narrow-bodied Boeing jet was built to satisfy airliners’ growing need during the early 1960s for a passenger jet that could be flown to and from smaller cities with shorter runways. The APU was another Boeing innovation that allowed air-conditioning and electrical systems to run without a ground-based power supply and or having to start one of the jet’s main engines. ATS’ particular 727-223 was once owned by Kitty Hawk Air Cargo based out of Texas, which went bankrupt in 2008.

“Our jet will be used to demonstrate the effectiveness of Aircraft Towing Systems,” Howie said. “King Aerospace will install the engine cowls we discovered inside, clean the aircraft and apply the ATS’ logos. If they can get the APU working, it will allow us to power the brakes and steering, which will make the testing of our prototype much safer and easier.

“We also purchased two new front tires. King Aerospace will also move the jet onto the ATS ramp space where it will be used for testing and demonstration purposes.”

Powered by an electric engine and featuring an underground rail channel system, the ATS prototype is designed to move aircraft to and from an airport’s runways to taxiways and gates - all without the use of an aircraft’s main engines. Anticipated benefits from ATS include improved safety, fuel savings, a reduction in airport accidents, decreased emissions, as well as increased airport efficiency, a longer jet-engine life, time management improvements, and a reduction in noise.

Howie said he first noticed the 727 at the Ardmore Industrial Airpark when he visited several years ago and thought he might eventually lease the jet as a test aircraft for the ATS prototype testing and demonstrations.

“When I discovered it was abandoned, I asked if I might buy it,” Howie said. “The City of Ardmore then filed for an abandoned title and put it up for auction, so we bought it. We are excited about the future of our ATS prototype and the innovation it will bring to airports worldwide.

“We believe our strategic investment in this jet will be the perfect instrument to demonstrate how ATS works in the days ahead.”

For more information about ATS WW LLC, please call Kevan Goff-Parker, director of Corporate Communications, ATS, at 405-514-3972, kevan.goff-parker@atswwco.com or contact Howie at 405-694-9861 or write him at vince.howie@atswwco.com. Website: https://www.aircrafttowingsystems.com