As a commentary on the true state of race relations in America, hip hop duo KIN4LIFE is releasing the single "Black In Amerikkka" on July 3 for Independence Day via Artists First Records. 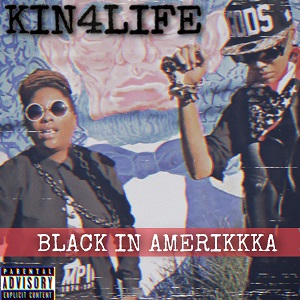 Philadelphia, PA, July 03, 2020 --(PR.com)-- As a commentary on the true state of race relations in America, hip hop duo KIN4LIFE is releasing the single "Black In Amerikkka" on July 3 for Independence Day via Artists First Records. Comprised of Mount Vernon, NY natives and Atlanta-based artists/songwriters/producers Nor and IQ, KIN4LIFE has been on the forefront of social justice from the groups inception more than two decades ago. Since releasing the video for the song in August 2016, the duo realized that the sentiment holds true even more in 2020 as evidenced by the ongoing pattern of violence against Black people in this country. The growing unrest and worldwide protests sparked by the recent killings of unarmed victims of police brutality such as George Floyd, Breonna Taylor, Atatiana Jefferson, to name just a few, prompted KIN4LIFE to release the single now, joining chorus of voices rising against these attacks on the Black community.

Recognizing that true freedom for black people has been a long time coming, and is still a long way off, Independence Day is an ironic backdrop for the record. "We have to re-release and recreate this song until there is real change," declares IQ. "It is our duty and requirement. I am Black in Amerikkka." Nor further explains, "This song is a cry for understanding." Artists First Records founder Melody Forrester adds, "In this climate of uncertainty and fear we choose to affirm that Black Lives Matter and rather than celebrate the July 4th holiday that does not represent freedom for Black Americans, we celebrate the lives of those who have paid the ultimate price at the hands of rogue law enforcement."