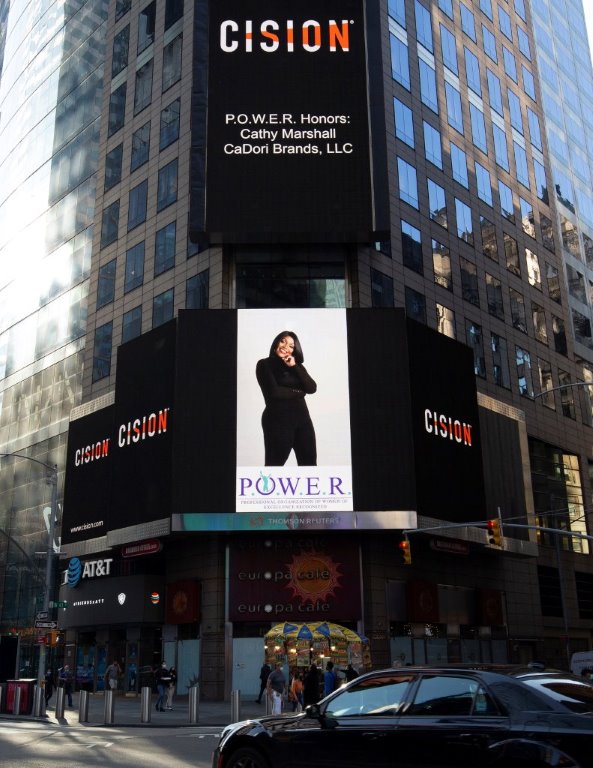 Katy, TX, October 27, 2020 --(PR.com)-- Cathy Marshall of Katy, Texas has been showcased on the Reuters Billboard in Times Square in New York City by P.O.W.E.R. (Professional Organization of Women of Excellence Recognized) for her outstanding achievements and contributions in the fields of self-empowerment, nonprofit and volunteering. Times Square, where the Reuters Billboard is placed, is considered the busiest area in Manhattan with approximately 330,000 people passing through daily, many of them tourists. It is also the hub of the Broadway Theater District and the world’s entertainment industry.

About Cathy Marshall
Cathy Marshall was born in Birmingham, Alabama. The eldest girl of 13 children, she is a natural born leader. Known as CaDori, she coined the name as a combination of her name, her mother Doris, and her late son Dougie.

CaDori loves helping others. She is the mother of five and is a registered nurse. She spends a tremendous amount of time giving back to her community. Before becoming a nurse, she was once homeless, jobless, and lived in a shelter. Her children were very young, and she experienced first-hand the struggle of depending on good-hearted people and her faith in God. CaDori wanted to help others in need. In 2017, she founded a nonprofit charity, CaDori Helping Hands, Inc. She donated baby supplies to young mothers and delivered cleaning and personal care items to families who lost everything during hurricane Harvey. She also donated backpacks full of school supplies to children in a local shelter and fed over 100 people displaced by the hurricane at a hotel in Livingston, Texas. In 2018, CaDori Helping Hands, Inc. provided turkeys and hams for Thanksgiving, and gave away winter coats to those in need.

In addition to CaDori Helping Hands Inc., CaDori also founded Dougie’s Kids, Inc., a charitable organization dedicated to helping and ensuring the well-being of children across America. It’s named after her oldest son, Bobby Denerio Marshall Brown, affectionately known as “Dougie,” who passed away in 2010 in a motorcycle accident. Dougie adored children and gave helpful advice, mentored, took them to fun places and supported them by attending games. To date, Dougie’s Kids has donated funds to shelters, schools, and awarded scholarships which have positively impacted the lives of many children.

As an entrepreneur, CaDori’s “I Love Me” apparel, CaDori Helping Hands Inc. merchandise, as well as her print books are available for sale on her website: www.Cadori.net and on Amazon.com. After the release of CaDori’s first book, “Women Put Yourselves First and Be Happier” and then a cookbook, her positive impact became evident. She had a fierce momentum with tons of media exposure within a couple of months. CaDori has been featured in several articles and on numerous radio shows, in An Interrupted Blogs article, an eTrade Wire article, an article in US Reporter, on HoustonTXBlack.com, in Urban Grandstand Magazine, Plaid For Women Dallas, Kontrol Magazine, Melan Magazine, Can We Talk Source Radio with Myra McKnight, The Ladiez Room Radio in Birmingham with Clarissa, The Covert Report with Susan Lindauer, Shadow Politics Talk Show with Senator Michael Brown and Maria Sanchez, and Bob Burns in Your Afternoon Talk Radio Show. CaDori was also a panelist at the State of The Black Woman Panel Discussion in San Antonio, Texas. She is also a radio co-host on the all new Amber Neal radio show on 953jamz.com Houston on Wednesday’s, for The Working Women Wednesdays segment 2pm-4pm. She is being honored as a top 10 Philanthropist in Houston Texas on November 11, 2020 by Amber Neal on Amber Neal Day in the City of Houston.

CaDori has a powerful new inspirational book for women due to be released on November 15, 2020 titled, “Ladies Love Yourselves First, That’s Happiness.” Pre-orders are being taken now on her website cadori.net.

CaDori has several upcoming virtual events planned for this year and would like to continue making a positive impact in the lives of others, especially during these uncertain times during the pandemic. They recently purchased a new van to deliver food and needed household supplies to people in need. CaDori Helping Hands, Inc. gave away 100 laptop computers to children who are economically challenged on September 1, 2020. National Suicide Prevention week was from September 6-12, 2020. CaDori supported suicide prevention by educating the public on its importance. During the month of October, the charity is assisting women in need of mammograms through The Rose in Houston Texas. CaDori Helping Hands, Inc. has already raised over $1200 for The Rose breast cancer organization in October to help fight breast cancer through the sales of her “I LOVE ME” hoodie clothing line at ilovemehoodie.com, with their goal being $2500. CaDori will also host a turkey and ham giveaway for Thanksgiving, and she will close out the year with her annual winter coat drive for people in need.

“Walk in your own truth and don’t be afraid to walk alone.”--CaDori

About P.O.W.E.R. Magazine (Professional Organization of Women of Excellence Recognized) and Powerwoe.com
P.O.W.E.R is an online community as well as a digital and exclusive print magazine featuring celebrities and everyday hardworking professional women. Our mission is to provide a powerful network of empowering women who will mentor and inspire each other to be the best they can be. Through our valuable services, our members can network, collaborate with like-minded professionals, gain recognition and obtain knowledge from those who have already achieved success.
Contact
P.O.W.E.R. (Professional Organization of Women of Excellence Recognized)
S. K. Koop
516-365-3222
www.powerwoe.com
Ellen Gold