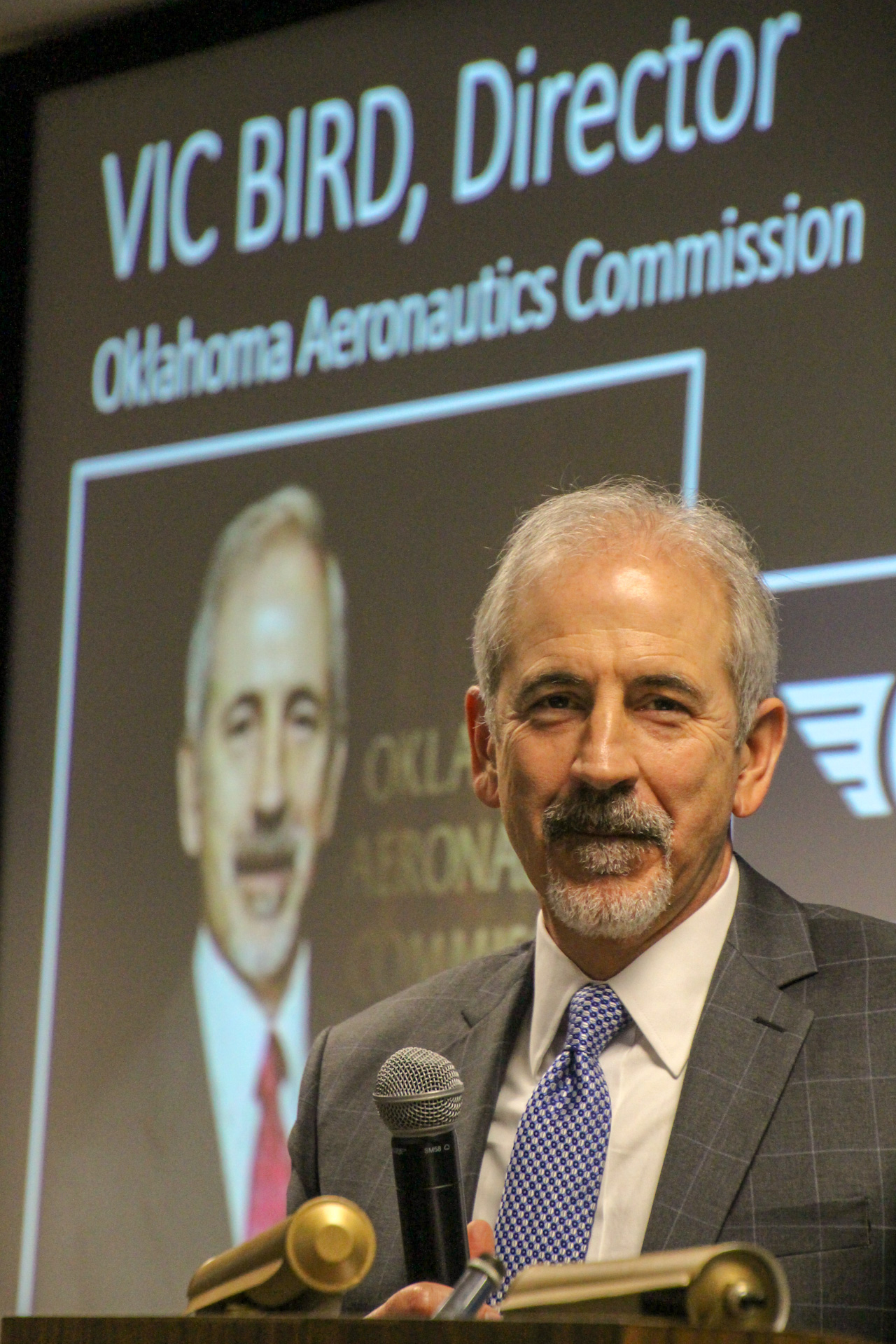 ATS Vice President/Chief Executive Officer Vince Howie said he’s been impressed with Bird’s significant leadership and management talents ever since the pair were matched through Tinker Air Force Base’s Honorary Commanders program more than 20 years ago – the community outreach and interaction program pairs state, legislative and civic trailblazers with key Tinker AFB senior staff for a period of one year.

“We are delighted to have someone of Vic Bird’s caliber on our team,” Howie said. “He’s an aerospace-policymaking and regional-funding airport expert who will help manage ATS as we advance into our next level of excellence. Vic has 36 years of distinguished public service with the state of Oklahoma, with his last 18 years serving as the director of the OAC.

“Vic Bird is the first and only Oklahoman to serve as chairman of the National Association of State Aviation Officials (NASAO) in its 90-year history, and is the only non-elected public official to receive the Aircraft Owners & Pilots Association’s most prestigious award, the Hartranft Award.”

He said Bird also received the General Thomas P. Stafford Award from Oklahoma’s aerospace industry for his outstanding contributions to the industry in 2009. In 2018, NASAO also presented him with its highest award, the Kenneth Rowe Ambassador of Aviation Award.

“Vic’s dedication and skills have made a tremendous and lasting difference in Oklahoma and beyond,” Howie said. “His tenure as director has been marked with distinction by his peers in aviation and aerospace, and by professional firsts. He is a nationally respected leader in aviation, and his expertise and advocacy have been instrumental in making aerospace Oklahoma’s second largest industry.”

“We believe Vic will use his ‘Airvangelism’ to help us make our revolutionary concept a reality,” he said.

Bird said he is also excited to become part of the ATS team.

“I’ll get to work with Stan and Vince, two gentlemen I have immense respect for and to help make this game-changing system a reality,” he said. “Powered and controlled aircraft by the Wright brothers revolutionized travel. The pressurized cabin, the jet engine, and air traffic control made monumental changes to aviation that impacted the world.

“I believe that this safety-enhancing, fuel-saving and environmentally friendly system of moving airliners on and around an airport will have an impact similar in magnitude to these other innovations.”

It was Malicki, a successful Polish businessman, who first envisioned the possibilities of the ATS system. Incorporated in Oklahoma in 2016, the company collaborated early on with Oklahoma State University’s (OSU) New Product Development Center (NPDC) on the system's design. ATS is now working with OSU's NPDC and other experts constructing the innovative ATS system.

Howie said Malicki’s dream of creating a way for pilots to move aircraft around airports without the use of a jet’s engines is now entering the prototype construction phase.

“We use an electric-powered pull car/tow dolly system designed to automatically transport aircraft at airports using an underground channel system,” he said. “After a pilot lands, the aviator taxis and drives onto the pull car/tow dolly system. Once the aircraft’s nose wheel is secured, the pilot can shut off the main engines, saving fuel costs for airlines and other air carriers, and significantly reducing carbon emissions.”

He said the beauty of the ATS system is that aircraft move using the underground channel system under the taxiway and on to the appropriate gate, and back, using electricity. The process reduces fumes (air pollution), adds significant fuel savings and increases overall efficiency.

Managed by airport tower operators, the system optimizes airport taxiway traffic and equipment in and around flight operations, plus it creates a much safer environment for aircraft at airports.

“We’re excited because unique steel components have already been shipped from Poland and will soon arrive at our prototype test site at the Ardmore Industrial Air Park in Ardmore, Oklahoma. We hope to move an airplane in early 2021,” Howie said.