Can men and women remain "just friends" indefinitely? Radio and Television Star Steve Harvey says "No way," and Dating Coach Alan Roger Currie agrees. Recently, Harvey experienced a high degree of backlash from many women on social media - Twitter in particular - regarding a video clip of an interview from 2010 where Harvey explains that he does not believe men and women can remain "just friends only" for an indefinite period of time if the man finds his female "friend" physically attractive. 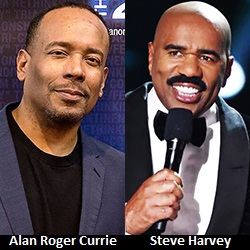 Hollywood, CA, April 29, 2021 --(PR.com)-- In 1989, a popular feature-film titled, "When Harry Met Sally" was released starring Billy Crystal and Meg Ryan, and the very entertaining romantic comedy asked the question, "Can a man and a woman ever remain purely platonic friends indefinitely? Especially if there is some degree of physical and sexual attraction present between the man and woman?"

Fast forward to 2010, and essentially this same question was posed to popular African-American Radio & Television star Steve Harvey. Harvey responded with, "I have no female 'friends.' 99.9% of men do not really want to remain 'just friends' with women if we are attracted to those women."

Similar to Harvey, Book Author and Professional Dating Coach for Men Alan Roger Currie began as a stand-up comedian, and then later turned his focus to offering dating and relationship advice to single heterosexual men.

Currie was the 1989 Grand Prize Winner of the Chicago Miller Lite Beer Comedy Search Contest, a contest that was won one year later by Harvey's former fellow "King of Comedy" Bernie Mac. Then, in May 1999, Currie published his first eBook titled, "Mode One: Let the Women Know What You're REALLY Thinking" which was released as a paperback on Amazon.com in February 2006.

Currie enthusiastically defends Harvey's comments about platonic friendships between men and women. "Most platonic friendships between single men and single women are totally disingenuous. The vast majority of men really want to date the woman, or at minimum, engage in a few episodes of short-term non-monogamous 'casual' sex with the woman. Similarly, the vast majority of women are just looking for a man to flatter their ego, entertain them with jokes and funny stories, provide them with financial and non-financial favors, and lend them an emotionally empathetic listening ear when the woman is feeling bored, lonely, or dejected. That is the real deal," said Currie, who published his most recent paperback titled, "No FREE Attention: How Women Use the Possibility of Sex to Manipulative Naïve and Lustful Men" in November 2020.

Currie says in his books that he and his Kappa Alpha Psi fraternity brothers in Bloomington, Indiana had a term for disingenuous friendships with women; they referred to a man maintaining an insincere platonic friendship with a woman as "FunClubbing."

"The only time a man and a woman can truly maintain a purely platonic friendship over a period of months, years, or decades is if the man or woman involved begin their friendship by emphatically stating that 'no sex will ever take place between us. Ever. I am not attracted to you at all sexually,'" added Currie.
Contact
Mode One Multimedia, Inc.
Alan Roger Currie
1-219-789-1948
http://patreon.com/modeone
Ms. Adrienne Yates (Publicist): 1-614-975-5690