The Oaklea Press Publishes New Book, “The Witch of Amesbury, Matriarch of an Advertising Dynasty” by a Former Principal of The Martin Agency

Stephen Hawley Martin, a former principal of the firm that created the GEICO Gecko and the slogan, “Virginia is for Lovers,” writes a new book that claims having a witch in the family may have contributed to the firm’s success. The Kindle edition will be free to download from Amazon on September 2 and 3. 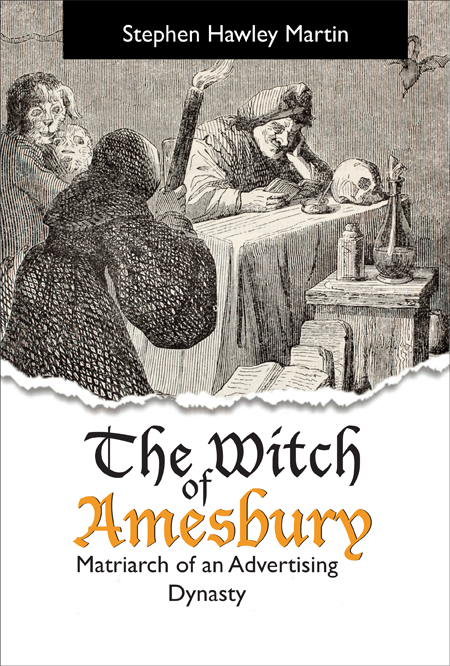 Richmond, VA, September 02, 2021 --(PR.com)-- A new book just published by The Oaklea Press entitled, “The Witch of Amesbury, Matriarch of an Advertising Dynasty” by Stephen Hawley Martin tells what the author believes to be the true story of his ancestor, Susannah North Martin, and what led to her trial and execution in 1692 Salem, Massachusetts. Martin, a former principal of The Martin Agency, the firm that created the GEICO Gecko, the slogan, “Virginia is for Lovers,” and was named 2020 U.S. Agency of the Year by the trade journal, ADWEEK, bases much of his theory on recent findings of scientific research.

Asked how having this family history helped him and his brother David, who co-founded the firm, take it from a small, local shop to one of national prominence, he said, “When you grow up knowing you are the direct descendent of someone who was accused, tried, convicted, and executed for witchcraft, it tends to make you look at things differently. You don’t necessarily buy into conventional wisdom or go along with ‘group think.’ That’s important if you want to create advertising that stands out. But I have to say there’s a lot more to it than that, as readers of the book will find out.”

Martin went on to say, “Advertising seems to be in the genes of the Martin family. My father was the managing director of an advertising agency. My mother was the office manager of a different one. My brother David co-founded The Martin Agency. I founded Hawley Martin Partners, which we grew and then sold to the Interpublic Group of Companies. My 29-year-old son is a senior copywriter for an advertising agency and has created ads for such notable brands as Amazon, Adidas, Nike, and Valvoline. My 27-year-old daughter is a market researcher and analyst who has helped create communications strategies for a number of high tech businesses, including Facebook and Google. And my 22-year-old son is currently a senior in the School of Mass Communications at Virginia Commonwealth University majoring in Advertising Strategy and has recently been offered an outstanding job in the field that he plans to begin this coming June, following graduation. If that’s not a dynasty, I don’t know what is.”

Martin’s new book focuses on his ancestor, but it also reveals what he believes was behind the witch hysteria that swept through the Massachusetts Bay Colony in 1692. He maintains that the truth is not what historians have been saying up until now.

The Oaklea Press Inc. was founded in 1995 and publishes business management, self-help, fiction, biographies, religious titles, as well as those to do with parapsychology and body, mind & spirit topics.
Contact
The Oaklea Press
Steve Martin
804-218-2394
www.oakleapress.com