WVI Dolphin Foundation, a 501(c)3 dedicated to furthering veterans and “sports for good” causes, has announced its 2021 honorees for the Spirit of Youth Sports Awards on Long Island. Those to be recognized include Barry Baker, Jr., Bob Catell, Amanda Ferranti, Guy Leggio, Nick & Tony Luisi and Jennifer Marks. All to be feted at Riverhead Gala hosted by Hockey Hall of Famer Pat LaFontaine on November 18. 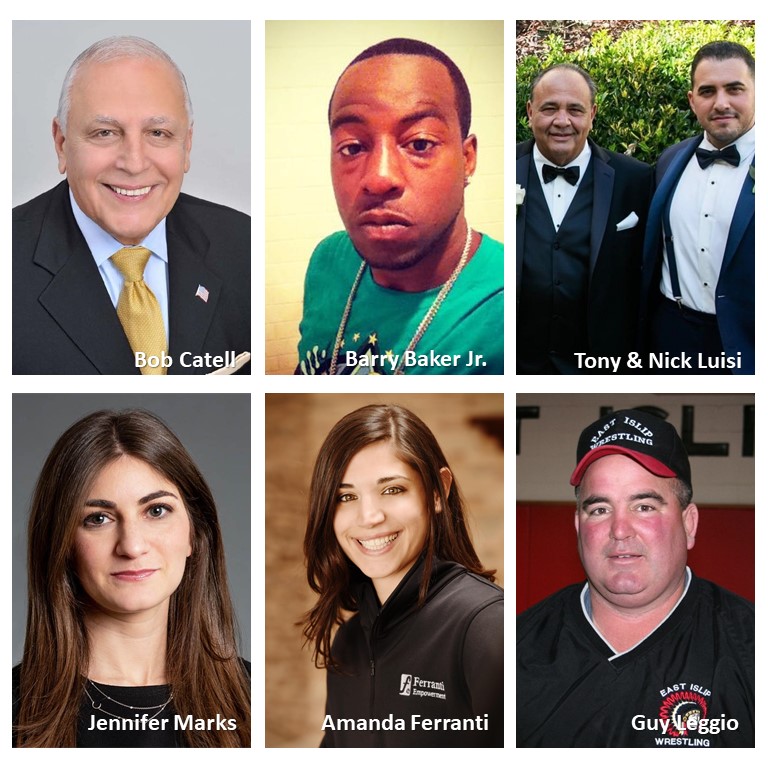 Riverhead, NY, October 12, 2021 --(PR.com)-- The WVI Dolphin Foundation, a nonprofit organization dedicated to furthering veterans and “sports for good” causes, has announced its 2021 honorees for the Spirit of Youth Sports Awards. The annual program, launched in 2019, recognizes Long Islanders who use youth sports to improve their communities, enrich the lives of boys and girls in their charge, and embody the values learned through sports in their everyday lives.

“It’s hard to imagine a group of individuals who better represent how youth sports can positively impact our communities,” said Jeremiah Schnee, co-founder of the WVI Dolphin Foundation. “Our 2021 award recipients represent different communities, different sports, different generations, and different contributions, but the one thing they all share is the willingness to give back and make certain that kids will continue to learn positive lessons on the fields of play. We are extremely proud to honor each of these remarkable men and women.”

Special Achievement honors will go to:

- Barry Baker, Jr. – One of Long Island’s most storied schoolboy athletes winning both the 1999 Hansen Award and the Carl V. Sadler Award as Suffolk County’s best football and basketball player respectively. He led his North Babylon High School teams to championships in both sports and chose to attend Syracuse University on a football scholarship. After graduation, he returned home to become one of the area’s most familiar faces coaching multiple sports across multiple age groups at the recreational, high school and collegiate levels. Currently the head basketball coach at Wyandanch High School, he led the Warriors to the 2019 Suffolk County Class A championship.

- Amanda Ferranti – A product of Long Island youth sports who is on the cutting edge of mental skills training and emotional management for young athletes. The Northport resident and South Huntington native was an age group soccer player for HBC Fury, a star at Walt Whitman HS, and a member of Princeton University’s 2007 NCAA Final Four team. A sports psychologist, Certified Mental Performance Consultant, and founder of Ferranti Empowerment, her practice concentrates on youth athletes, teams, and coaches. Her innovative methods, including “Own Who You Are” – a workbook she authored – have made her popular among Long Island’s sports families.

- Guy Leggio – A 2019 enshrinee into the Suffolk County Sports Hall of Fame where he joined his father, “Jumper” Leggio, as one of three such multi-generational duos. The Bay Shore resident and longtime volunteer firefighter coached wrestling at East Islip High School for 26 years producing 85 league champions and seeing the school’s wrestling room named in his honor. Among many previous citations, he has been recognized as PAL Man of the Year and New York State Coach of the Year on his way to induction into the National Wrestling Hall of Fame. He is also the founder of East Islip Kids Wrestling.

- The Luisis – Nick Luisi made news in 2020 when he donated a kidney to save his father Tony’s life. A fifty-year stalwart on Long Island’s youth sports landscape as a player, coach, and parent, Tony Luisi had previously founded No Let Up charity services which took the lessons learned through a lifetime of team sports and applied them as a rallying cry to local causes. Both men grew up on the fields of Bethpage and both starred for CHSAA Championship teams at Holy Trinity High School in Hicksville - Tony with the 1977 football team and Nick with the 2003 baseballers (where he was CHSAA MVP.) Tony went on to play football at Marist College and to a successful career in business. Nick played at St. John’s University and currently owns the North Shore restaurant Roslyn Social.

Among those to receive Champion Awards are:

- Bob Catell – The former CEO of Keyspan/National Grid is one of Long Island’s best known and most generous business leaders and a strong supporter of education. The Garden City resident and current Chairman of the Advanced Energy Research and Technology Center (AERTC) at SUNY Stony Brook as well as the National Offshore Wind Research and Development Consortium is being honored for his extraordinary generosity as a long-time benefactor to the WVI Dolphin Foundation.

- Jennifer Marks – As Managing Director and Market Team Lead in the Long Island office of J.P. Morgan Private Bank, the Plainview resident is responsible for the bank’s support of key 2021 WVI Dolphin Foundation activities including the co creation of its highly-acclaimed Financial Literacy module -- a key component of the foundation’s “Leadership and Life Skills Mentorship” initiatives.

Nominees are considered by the WVI Dolphin Foundation Board and final honorees are approved by its Sports for Good Advisory Board – including business leaders, veterans, and former professional athletes. The awards will be presented at the foundation’s annual dinner, hosted by Hockey Hall of Famer Pat LaFontaine, at The Residence Inn by Marriott - Long Island East End in Riverhead on November 18. Proceeds from the event will support the organization’s youth mentorship programs throughout Long Island and New York. For further information or to purchase tickets to the dinner, search “Spirit of Youth Sports Awards” on Eventbrite.

About the WVI Dolphin Foundation
A registered 501(c)3 co-founded by Peter Cuneo, Margaret Poswistilo, and Jeremiah Schnee, the WVI Dolphin Foundation’s mission is to provide concrete ways and means to encourage Legacy Families and others of influence to utilize their considerable prestige, wealth, and power to uplift culture by supporting earlier stage/smaller not-for-profit causes that are deeply aligned with the Dolphin culture and code of conduct that encourages long-lasting, trust based relationships founded on integrity, community, and altruism. Funds raised are channeled to worthy niche charities that support Veterans and Sports for Good Initiatives.
Contact
Gina Pirozzi
212-228-1249