The United States National Teqball Federation is supporting Refugee Soccer in its mission to provide opportunities and established community connections for refugees locally in Utah and across the USA. 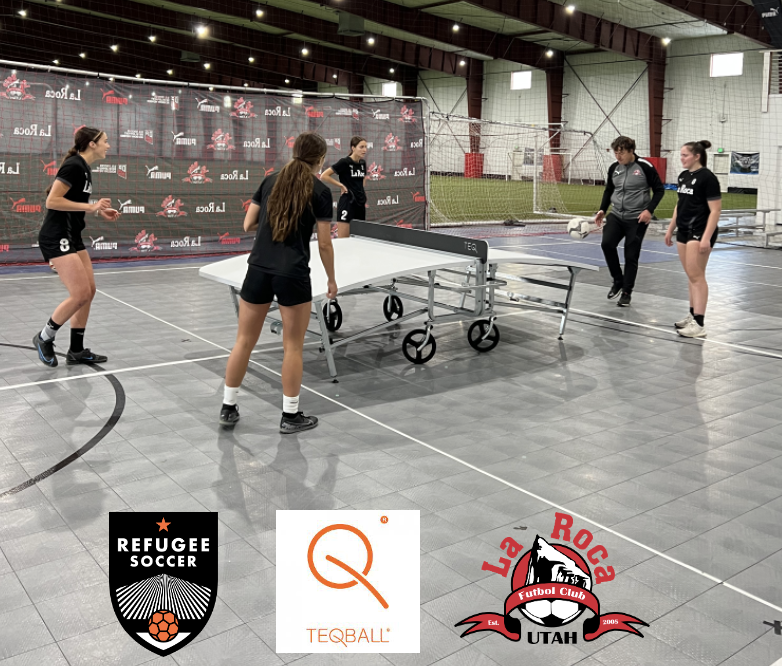 Teqball is a soccer-based sport played on a specially curved table (the Teq Table) and is one of the newest emerging sports growing rapidly around the world. Teqball has held three world cup tournaments and has its eyes set on becoming an Olympic Sport by 2028. The sport is attracting elite athletes and amateur enthusiasts whose ambition is to develop their technical skills, concentration and stamina. Teqball games are played between two opponents (singles) or two teams of two (doubles) and brings a unique opportunity for competitors to compete with whomever they’d like, irrespective of gender. Games are played with a points-based scoring format where points can be scored with any part of your body except your arms or hands. As Teq tables are very versatile, Teqball can be played on various surfaces including sand, turf or indoor courts.

Ajay Nwosu, CEO & President of USA National Teqball Federation, explained the motivation behind the donation: “Teqball, like the world’s sport of soccer itself, is a beautiful sport in that anyone can play and improve their soccer skills, have fun, whilst also having a sense of belonging to a like-minded community. That said, in the 'pay to play' world of soccer, in the United States especially, we recognize that access to a Teqball table and the community our sport represents is vital to ensuring that every capable player reaches their true potential in sports and life. We are happy to support Refugee Soccer as they continue to create opportunities to reach vulnerable and marginalized communities across the USA through soccer.”

Adam Miles, Founder and Executive Director of Refugee Soccer commented: “Teqball is yet another way to engage our refugee youth with productive soccer-based activities. These Teqball tables and the teams we are now forming provide these often-unseen kids a unique way to spend their free time. It also offers a path for these kids to hone their soccer skills and get on a path towards excelling at what will likely become an Olympic sport later this decade. Meanwhile, this exciting gift from Teqball USA also opens an opportunity for Refugee Soccer Teqball Team members to compete nationally for prize money in sanctioned tournaments. This is a huge win for refugee kids and helps us further accomplish Refugee Soccer’s ambitious mission.”

They are also very pleased to announce that their strong existing Refugee Soccer partner, La Roca FC, the most successful youth soccer program in Utah, will be placing two of these donated tables in their facilities in South Weber and Utah County. This expands the reach of this program for refugee youth who do not live in Salt Lake City. La Roca FC Founder & Technical Director, Adolfo Ovalle, said: “We are excited to build on our growing relationship with Refugee Soccer by placing these tables in our facilities for refugee kids who want to play this really cool soccer-based sport. We can’t wait to meet and support the kids who will come to play and look forward to building relationships with them.”

The tables have been delivered and setup now and play will begin immediately. More information about this partnership can be found and interested refugee kids can register to join the Refugee Soccer Teqball Team at this dedicated website: https://refugeesoccer.org/teqball/.

About Refugee Soccer
Refugee Soccer was formally established in 2016 as a dedicated program under the 501(c)(3) entity known as Bridges To America, Inc. based in Salt Lake City, Utah. Bridges To America was started in 2005 originally to reunite African families separated by war, famine, and poverty. Soccer became a key part of Bridges’ efforts around 2013 as founder and executive director, Adam Miles, started to involve his four children in the effort. His then 13-year-old daughter, Kylie, a goalkeeper played a fundamental role in raising funds to deliver 100 soccer balls to kids living in rural villages in Ghana, West Africa through the Bridges’ program known as Save-A-Thon For Africa. This effort was the genesis of Refugee Soccer.

Today, the mission of Refugee Soccer is to create moments of hope and happiness through soccer around the world. We create and support solutions that combat the tremendous losses of productivity, progress, and hope that result from the massive displacement occurring in the world.

About Teqball USA
Teqball is the popular sport emerging around the world -- and finding huge popularity across the United States and among professional and celebrity fans including Messi, Neymar, Ronaldinho, David Beckham, Mauro Icardi, Eden Hazard, Justin Bieber, and Adam Levine. To date, Teqball USA has pledged a 200 table donation over the next 24 months to be donated to communities and major cities across the USA.

The soccer-based sport is played on a specially-curved table (the Teq table), and is attracting a new generation of athletes and amateur enthusiasts (Teqers). Teqball USA is committed to building a community by using the power of sports to build cultural relevance and creating a movement that brings joy to people’s lives daily. Fans can tune in and enjoy viewing the sport on ESPN. For more programming details view @usateqball or espn.com/watch.

About La Roca FC
La Roca Futbol Club was established in 2005 to provide a quality competitive youth soccer program in Utah and has grown to become the most successful club in the state with more State Cup Championship titles than any other club in the state. La Roca FC trains serious youth soccer players who desire an opportunity to develop and showcase his/her skills to the fullest potential. To date, La Roca has produced 20 professional players both domestically and internationally and helped over 400 athletes obtain a collegiate scholarship. La Roca FC offers players a chance to play at the highest level of state competition and compete in various regional and national tournaments and leagues. La Roca is a 501(c)(3) corporation under the direction of its Board of Directors.