Buster and Lass are little bugs with Big dreams. Their dreams take them to extraordinary places. In Buster’s Really Great Big Top Show, Buster and Lass’s dreams take them to the Biggest little show on earth. Buster’s Really Great Big Top Show and the related books are published by Reagent Press and Bugville Publishing under the Bugville Jr. imprint. The Bugville Jr. books, written for children ages 6 months and up, keep with the unique educational outlook of the original Bugville books. 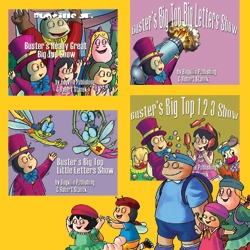 Seattle, WA, December 28, 2010 --(PR.com)-- Buster and Lass are little bugs with Big dreams. Their dreams take them to extraordinary places. In Buster's Really Great Big Top Show, Buster and Lass's dreams take them to the Biggest little show on earth. Debuting first in digital and then print and audio, Buster’s Really Great Big Top Show features Buster as the ringmaster and his friends as the star performers. Just as the story says, parents and kids will want to put their hands together and clap for Ringmaster Buster and the All-Star performances of his friends.

What makes these books really special is that the author, Robert Stanek, used these books to teach his own children while building on concepts they were learning on preschool and pre-K programs. Robert Stanek quietly worked on the Bugville Critters for 15 years and was satisfied with only the gleeful cheers, laughs and giggles of his children who delighted to hear his tales of Bugville and the little bugs who lived there. Robert’s children are the ones who urged him o get the books published so other children could share in the adventures they so cherished. While Robert worked on getting the original 28 books to print from 2004 to present, he continued writing and developing new stories.

Robert Stanek’s years and years of dedication to these adventurous children’s books will ensure there are many, many more adventures in Bugville and that’s a good thing because children around the world have been writing to Buster care of Reagent Press. Dozens of these letters are posted online at the Reagent Press’s Bugville Critters web site, www.bugvillecritters.com. And what the children writing to Buster want more than anything else, are more stories set in Bugville.

Buster’s Really Great Big Top Show and the related books are published by Reagent Press and Bugville Publishing under the Bugville Jr. imprint. The Bugville Jr. books, written for children ages 6 months and up, keep with the unique educational outlook of the original Bugville Critters books: helping children discover the world around them while combining facts about our natural world with fictional stories that instruct and entertain.

Robert Stanek has been dreaming up stories since he was a boy, but it was only since the early 1990’s that his work began to get published. As a technology journalist, Robert (writing as William R. Stanek) has written for PC Magazine, Dr. Dobbs, TechNet Magazine and a variety of other leading magazines. As a technology writer, he’s written for Simon & Schuster, Random House, Macmillan, Pearson, Microsoft, O’Reilly and other publishers. Of that, he says, "My many technical articles and technical books have helped millions learn essential job skills and stay competitive. That’s important, especially in these troubling economic times.

"My children’s books are helping kids learn essential life skills. The Bugville books provide stories that address real issues and challenges children face. Each book provides positive lessons about life, friendship, family, our world, the natural world of which we are all a part, and our environment."

About the Author
Robert Stanek is the author of over 100 books. His epic series Ruin Mist Chronicles includes Keeper Martin's Tale, Kingdom Alliance, Fields of Honor, and Mark of the Dragon and was also released for young adults as The Kingdoms and the Elves of the Reaches #1 - #4 and In the Service of Dragons #1 - #4. He is also well-known for his Bugville Critters children's picture book series. His books have been bestsellers on Amazon.com, Barnesandnoble.com, Audible.com, and Apple iTunes. Related web sites include www.robertstanek.com, www.ruinmistmovie.com, www.themagiclands.com, www.ruinmist.com, and stanek.reagentpress.com.