Announcing the Second Edition of the Piping System Fundamentals Book 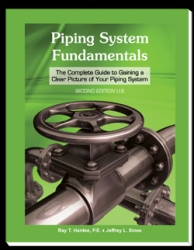 The book, originally published in 2008 by ESI Press, has sold over 3,000 copies, and is offered in both a US or Metric version. The Second Edition is currently only available in US units, but the metric version is expected for release in May 2012.

“Many of the publications available on piping systems are highly technical in their presentation of the facts. With the Piping System Fundamentals book, we really strove for a book you could sit down and read through without having to get out your other reference books,” said Ray Hardee, P.E. author and CEO of Engineered Software. “This time we placed more emphasis on understanding the flow of energy through the system and allowing the reader to quantify it in order to calculate the financial cost of that energy.”

In addition to content changes, the publisher completely reformatted all the images and tables to achieve a more consistent look throughout. A new cover design, and special supplementary software has been added to the second edition.

“I think the new format will really catch the readers’ attention and be more visually pleasing, in addition to conveying the main messages of the text more effectively,” said Jeffrey Sines, Training Lead at Engineered Software, Inc. “The rearrangement of many of the sections will make the book follow a more logical path to understanding how piping systems function.”

The Piping System Fundamentals second edition will be included in the training course offered under the same name, and will complement the recently updated content for the course. Co-Author, Sines, made major updates to the training material last year, and was the main contributor of the updates to the second edition. Sines brings over 20 years of experience in plant operations, and process engineering, as well as over 500 hours of training instruction experience.

Original author, Ray Hardee, PE, has written a new Foreword touching on the motivation behind the update and the book’s main objective. Hardee has had over 13 years in the power generation industry, and has served as the CEO and co-founder of Engineered Software for nearly 30 years. He has contributed dozens of articles and papers to various magazines and standards publications and has given over a thousand presentations on fluid piping systems around the world. Hardee is a member of the Hydraulic Institute and was most recently recognized for his contributions on the new standard, Electronic Data Exchange for Pumping Equipment, HI 50.7-2010.

Popular features from the previous edition are also included in the second edition including case studies, troubleshooting examples and a section on improving system performance, all in an easy-to-read but comprehensive book.

Pricing and Availability
Piping System Fundamentals: The Complete Guide to Gaining a Clear Picture of Your Piping System Second Edition, is regularly priced at $95 USD. The book is now available for PRE-Order with a $5 discount until April 9th, 2012. The book is also included free with registration to a Piping System Fundamentals Training Course, schedule available online. For book, training registration and further information, visit www.fluidfundamentals.com, call (360) 412-0702 or email info@eng-software.com.

A free preview of the book is available online here: http://www.fluidfundamentals.com/Book%20SECOND%20PreviewSECURED.pdf

“This new edition of Piping System Fundamentals does an excellent job of putting together in one reference book a wealth of information on all of the elements of piping systems, and how those elements interact. The book is current, comprehensive, and easy to read, and I would recommend it to anyone who works regularly with piping systems.”
- Michael Volk, P.E. Author of Pump Characteristics and Applications, 2nd Edition, CRC Press.

“The Piping System Fundamentals book is a clear, accessible volume covering all the important points for understanding fluid piping systems. What the authors propose is efficient design from the ground up, and complete understanding of why and how components in the system operate together. It’s not only a guide for troubleshooting common system issues, but a valuable resource for improving system design. A must read for anyone working with, on or around piping systems.”
– Dale Friemoth, VP of Technology for Crane Fluid Handling

About Engineered Software, Inc.
Founded in 1982, Engineered Software, Inc. has created products known worldwide for high end-user satisfaction rates. The company has two award-winning product lines – PIPE-FLO and PUMP-FLO Solutions. Recognized as the best in the industry, the programs’ interface was developed and refined based on over 25 years of customer feedback. Engineered Software is also the creator of Flow of Fluids Premium software, and holds an agreement with Crane Valve North America to produce, market and sell their Technical Paper, TP410. Engineered Software, Inc. has more than 5,500 clients worldwide across a variety of industries including aerospace and defense, chemical processing, engineering design and consulting, food and beverage, oil and petrochemical, mining and metals, pharmaceutical, power generation, pulp and paper, waste water collection and treatment and education.
Contact
Engineered Software, Inc.
Natalie Jensen
360-412-0702
www.eng-software.com
Twitter: @EngSoftware
Facebook: www.facebook.com/EngineeredSoftware