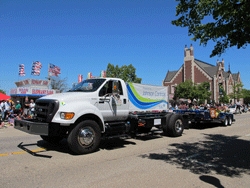 Waukesha, WI, May 12, 2012 --(PR.com)-- Odyne Systems, LLC, a clean technology company that develops and manufactures hybrid drive systems for medium and heavy duty trucks, participated May 10 in the Children’s Tulip Parade in Holland Michigan, a featured event in the 83rd Tulip Festival. The parade included children from over 60 schools and agencies and is believed to be the first in the nation featuring all hybrid and electric vehicles towing floats in a longstanding community parade.

The parade is part of a weeklong celebration known as the Tulip Festival, which dates back to 1929 and draws over 100,000 people from around the world to see 6 million tulips in bloom. The week features multiple parades, pageantry, costumes and Dutch Dancers interfacing throughout the community for the duration of the festival. Tulip Time Festival has been recognized as a top 20 event in the world by the International Festival and Events Association, a Top 100 event in North America by the American Bus Association, and was named America’s Best Small Town Festival by Reader’s Digest.

Sold through a worldwide distribution network, the Odyne advanced plug-in hybrid propulsion system, available on class 4-8 trucks over 14,000 gross vehicle weight, can be applied to a wide variety of new and existing commercial work vehicles. The system, designed to be robust for demanding work truck applications, reduces fuel consumption by up to 50%, depending on duty cycle, reduces emissions and provides quieter operation at the work site.

About Odyne Systems, LLC
Odyne is a leader in hybrid drive systems for medium and heavy duty vehicles. Odyne’s advanced plug-in hybrid technology enables trucks over 14,000 pounds to have substantially lower fuel consumption, lower emissions, improved performance, quieter job site operation and reduced operating and maintenance costs. Odyne has fielded more plug-in hybrid trucks to fleets throughout the United States than any other supplier. The company sells its unique modular hybrid system for new and retrofit applications direct to truck manufacturers and through a global distribution and service network. The name Odyne represents the combination of “O” for Optimal and “dyne” for force. Odyne’s hybrid system for medium and heavy duty trucks represents the best hybrid power solution for large trucks. For further information, visit us at www.odyne.com and follow us on Twitter @Odyne.
Contact
Odyne Systems, LLC
Louise Hermsen
262-544-8405
www.odyne.com