The Malaria Foundation International applauds efforts of Botswana, Africa and Colorado, USA teachers working together to educate and train students to become active leaders in the world’s fight against malaria. 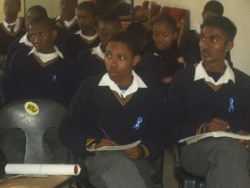 Atlanta, GA, August 24, 2007 --(PR.com)-- Mr. Tommie Hamaluba, a computer technology teacher from the Gaborone Senior Secondary School in Gaborone, Botswana and teacher Mr. Bill Meyers, from the Alexander Dawson School in Lafayette, Colorado, USA have been partnering to teach students in the United States and Botswana about malaria.

They contacted the Malaria Foundation International to join the End Malaria - Blue Ribbon campaign and have since become dedicated members of the foundation’s growing “Student Leaders Against Malaria” (SLAM) network.

Malaria kills 3,000 people daily, mostly children, and SLAM aims to reduce this the global burden of sickness and death through hightened education and the empowerment of student leaders. Partnerships of teachers and students and the development of longlasting friendships is also key to the SLAM network.

Mr. Hamaluba and Mr. Meyers have completed their first End Malaria – Blue Ribbon Campaign community educational-training session. The Campaign was launched on 13th August, 2007 by Her Excellency the American Ambassador to Botswana Katherine Canavan. The launch of the campaign was locally called the "Kgotla meeting" in the Tswana language.

During their first day of activities, Mr. Hamaluba and Mr. Meyers met with Botswana's Ministry of Health officials to address the malaria and other health concerns faced by the Gaborone community. Dr. Naresdine Oumer from the Ministry of Health offered a training session on malaria, the disease, the diagnosis, the treatment and prevention, directed to student leaders from the Gaborone School in preparation for their ‘Educational Brigade’ to the Botswana North 2 region.

Twenty five student leaders were trained to go from house to house educating the households on the best ways of preventing malaria and engaging the communities in a dialogue about working together to control the disease. The students and leaders referred to their experience as "electrifying".

Long-lasting insecticide-treated bed nets, provided by Nancy Hodson and friends from Allen, Texas, USA were distributed during the household visits. End Malaria Blue Ribbon pins were also distributed as an inspirational life-saving symbol of the campaign. The students covered 1170 households beating their target of 500-1000 homes.

“The campaign has the potential of expanding rapidly through Botswana,” said Tommie Hamaluba. "We shall cover the whole of Botswana with educational and life-saving messages”.

Tommie’s students traveled 1200 kilometers from Gaborone city to educate communities about malaria. Future similar expeditions are currently being planned, along with continued in depth education for the project’s student leaders.

Mr. Tommie Hamaluba was the recipient of the MFI’s Malaria Award for Teacher of the Year in 2006, having been nominated by iEARN (International Education and Resource Network) officials. “We are pleased to have learned about Tommie’s ambitions in Botswana and to be able to support his grass roots efforts,” said Dr. Esmeralda Meyers, Outreach Director of the MFI.

The MFI’s Malaria Awards for 2007 will be announced at www.malaria.org by the end of August. This awards program, launched last year, has been a fine means to learn about special leaders and ‘unsung heroes’ working tirelessly in malaria endemic countries, said Dr. Mary Galinski, President of the MFI.

The End Malaria Blue Ribbon Campaign was launched by the MFI in November 2006 with the volunteer support of students from Emory University, Atlanta, GA. It is expanding as a leading initiative of the MFI’s Student Leaders Against Malaria (SLAM) network, which aims to educate and partner teachers and students worldwide in the fight against malaria. Recently, the MFI joined forces with Choi Kwang Do Martial Art International, which has adopted the End Malaria - Blue Ribbon campaign to help support community-based educational projects led by student leaders around the world.

Further information can be found at www.malaria.org.