Wounded Marine on quest to raise $1 million for charities that supported his recovery. 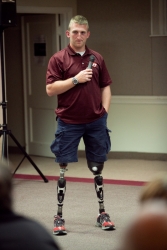 Charlottesville, VA, September 12, 2013 --(PR.com)-- During his 2010 deployment to Afghanistan, Marine combat engineer Rob Jones was hit by an improvised explosive device (IED), resulting in double above-knee amputations of both his legs.

Last summer, Rob and his partner, Oksana Masters, won a Bronze Medal at the 2012 Paralympic Games in London in the Trunk and Arms Mixed Double Sculls event.

And on October 14th, Rob will be embarking on a four-to-seven-month cross-country cycling odyssey to raise funds for the charities that aided him in his long and arduous recovery. His Olympic-sized fundraising goal: $1 million.

Given his extraordinary track record, who would bet against him?

As if cycling cross country on prosthetic legs wasn’t difficult enough, Rob has decided to begin his journey in Maine, head south along the Atlantic seaboard to Blacksburg, VA, pivot west and head for San Francisco, then “coast” south toward his personal finish line in San Diego.

“I’m not taking this quest lightly. I know it’s going to be a difficult ordeal. But I am absolutely determined to achieve my goals,” Rob said, while training for the trek. “I know I’ll be successful not because I’m doing it for me, but because I am committed to giving back to the organizations that were there for me in my darkest hours. They helped me stand back up on new legs, learn how to walk again, then ride a bike again, then become a world-class rower. Now, with the help of patriotic and generous Americans, perhaps I can pay it forward, so those organizations can help even more wounded soldiers, like me, in their time of greatest need.”

Virtually unique among other ambitious fundraising initiatives, 100 percent of the money donated to Rob Jones’ Journey will go to the charities he is supporting: The Coalition to Salute America’s Heroes, the Semper Fi Fund and Ride 2 Recovery. Rob has already secured enough funds to purchase the equipment, including a support vehicle, he’ll need to complete his trip. He will be counting on the kindness of his fellow Americans for an occasional meal and overnight accommodations, but all cash donations made through his web site, www.RobJonesJourney.com, will pass directly through to the charities.

“It’s important to me that people know I’m not getting anything out of this financially,” he explained. “While I will accept certain in-kind sponsorships from companies that want to support me, any cash they provide will go directly to the charities. Just like the funds that individuals donate. This is truly all about giving back.”

Rob has already secured one corporate supporter, Bonk Breaker Energy Bars, which is supplying its products to help fuel the journey.

A gifted athlete, Rob has competed in the Marine Corps 10K (6.2 Miles), the Army 10-Miler, the Charlottesville Half Marathon, the CFI Mini Triathlon and the Nation’s Olympic Distance Triathlon (a .9-mile swim, 24-mile bike, and a 6.2-mile run). In his short adaptive rowing career, Rob and his Team Bad Company partner, Masters, have won several major competitions, including the 2012 U.S. Paralympic Selection Trials, the 2012 World Rowing Final Paralympic Qualifier in Belgrade, Serbia, and the 2013 U.S. Para-Rowing Championships. The pair placed 3rd in the Samsung World Rowing Cup in England earlier this year, and 4th at the World Championships in South Korea in August. Rob was named USA Rowing’s 2012 Man of the Year.

Media representatives interested in scheduling an interview with Rob before or during his journey may contact Ladd Biro at Champion Management via email (lbiro@championmgt.com) or via phone at 817.675.3499.
Contact
Coalition to Salute America's Heroes
Ladd Biro
817-675-3499
www.saluteheroes.org
Champion Management is proud to be the Coalition's PR agency of record.