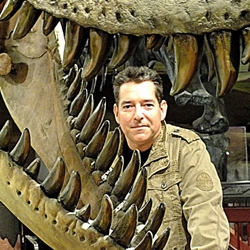 Tucson, AZ, September 25, 2013 --(PR.com)-- It doesn’t feel like autumn in much of Arizona, but the unrelenting heat hasn’t deterred intrepid TV host and adventurer Geoff Notkin from filming his exciting new TV series, STEM Journals at locations throughout the state.

Set to debut its second season on Sunday, October 20 on Cox 7 (the first with Notkin as host), STEM Journals is a fast-paced educational TV series featuring cutting-edge science, technology, engineering and math stories from across Arizona.

Designed to entertain and inform both children and adults, the show provides rare behind-the-scenes access to the state’s latest STEM research and innovation sites, while highlighting career pathways and degree options for students.

The five episodes of STEM Journals already ‘in the can’ have taken Notkin to the Arizona Museum of Natural History, the campuses of Arizona State University and the University of Arizona, Flagstaff’s Lowell Observatory, the Mt. Lemmon Sky Center, and Barrow Neurological Institute -- where Notkin was delighted to learn that he and world-renowned neuroscientist Dr. Stephen Macknik are fans of each other's work.

Three more episodes will be filmed in the coming weeks to round out Season Two. Topics for the new season include archeology, astronomy, alternative energy, biomechanics, light, and civil engineering.

So far, Notkin helped fabricate solar panels in a clean room, took the ‘Lotus Mobile’ solar-powered Tesla Roadster for a spin, searched for artifacts at an ancient Hohokam archaeological dig site, and hunted for rogue asteroids at the Catalina Sky Survey.

He has also launched helium balloons from the roof of Steward Observatory, inspected the latest military technology at the ASU Flexible Display Center, met a primitive algae that produces natural biodiesel, and controlled a massive mechanical robot arm wired to his biceps.

Filming a science-themed television adventure show is nothing new to Notkin. He starred for three seasons on Science channel’s award-winning television series Meteorite Men, currently airing in 30 countries around the globe.

"After traveling the world digging up the rarest treasures from space, now I'm back home in Arizona digging up the newest, coolest technology and education stories on my own doorstep,” said Notkin. “It's a dream come true and I encourage everyone to join the adventure starting October 20."

STEM Journals is produced by Cox Creative Studios, Paint It Black and Deep Sky Productions and will air on Cox channels 7 and 1007 in Arizona, On DEMAND in the FreeZone on Cox Cable, on the Cox7 app (iOS and Android), the Roku® streaming box, and worldwide on www.cox7.com.