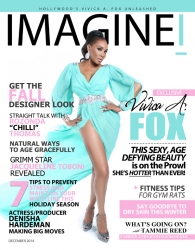 Atlanta, GA, December 13, 2014 --(PR.com)-- IMAGINEI Magazine celebrates their sexy holiday edition with an exclusive interview from the glamourous and age defying beauty Vivica A. Fox. “Fifty never looked so sexy!” Vivica dishes about her fabulous life, loves and career. Vivica has movies, hair product lines, and television shows all in the works. This beauty conquers it all. Vivica A. Fox is starring on “Celebrity Apprentice” premiering in January 2015. But that’s not all.

The gorgeous Jacqueline Toboni from NBC television show “Grimm” gets up-close and personal with IMAGINEI Magazine. This flawless beauty captivates her fans in her role on “Grimm.”Catch up with Jacqueline Toboni on “Grimm” airing on NBC.

The talented Rozonda “Chilli” Thomas chats with IMAGINEI regarding family, “Lefteye” and her new show Fakeoff. All her fans are so excited to see “Chilli” our America’s sweetheart on television again.

Actress/Producer Denisha Hardeman chatted with IMAGINEI about the behind the scenes life and being a producer. She appeared in Django with Oscar winning/nominated names like Jamie Fox, Samuel L. Jackson, Kerry Washington and Director Quentin Tarantino. Denisha Hardeman has a new movie she produced coming out about women and domestic violence issues.

IMAGINEI Magazine interviewed the one and only fashion/beauty/life/blogger Tami Reed. She dishes on the true definition of a fashionista. Tami Reed has a keen eye for fashion and a razor-sharp wit. She is definitely a powerhouse in the fashion world.

About IMAGINEI MAGAZINE: IMAGINEI Magazine provides information and inspiration on everything from the latest in fashions, style, beauty, politics, relationships, health, weddings and entertainment. With this magazine they want to inspire the uninspired.