Announcing a newly published collection of beloved Bulgarian folk tales brought to life for a new audience by Varna International Publishers. The Petals from the Rose Series presents the cherished folk tales of the land of Bulgaria newly translated by Rayna Rosenova, masterfully adapted by Scott Cairns, and beautifully illustrated by Boris Stoilov. Let your imagination soar with this two volume collection of Bulgarian folk tales by Varna International Publishers. 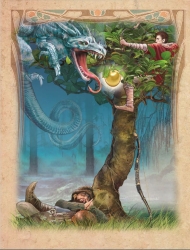 Bulgarian-born local business owner, Kalin Tchonev, is pleased to announce the release of the first two volumes of Petals from the Rose, a storybook series presenting a collection of Bulgarian tales for the first time to an American audience.

Local businessman, Kalin Tchonev, launches his first publication venture with the release of two volumes of a newly translated series of Bulgarian Folktales, the Petals from the Rose Series. The stories result from his collaboration with world-class author, Scott Cairns, and award-winning international illustrator, Boris Stoilov, bringing his childhood stories to life--not only for his young son’s enjoyment, but for a new generation and culture. Tchonev, CEO of Varna International Publications, is excited to present these Bulgarian stories for the first time to an American audience through two initial volumes of international children’s literature books. The publication release date for this series is set for April 1, 2016. This first edition of the English adaptation of Bulgarian Folk Tales was printed in Bulgaria. The books are dedicated to the publisher’s young son Eliav Tchonev.

Tchonev says of this project, “My first encounters with literature were fairy-tales from around the world. Our home held a vast library. I read through countless large volumes of tales from different nations’ folk traditions: French, Japanese, Siberian, Arabic, German, Indian, Bulgarian, as well as many novels and stories by authors from around the world. I was fascinated by these stories from distant lands and people. I was delighted that, with each tale, the world itself seemed both to expand and to beckon. These tales inspired me.”

The motivation of his childhood literary experiences and the yearning for his son to experience the same are not the only endeavors Tchonev has through this project. He desires that his books open the door for Americans to the culture and heritage of Bulgaria. “These books contain a selection of the folk tales of the Bulgarian people,” he said. “They are particularly special to me, as they originate from the land of my birth, among a land and a people I deeply cherish. I am delighted to bring these tales from Bulgaria to the children of America and wish them a wonderful journey, traveling - through the power of imagination - to the distant land and people of Bulgaria.”

About the Publisher
Born in Varna, Bulgaria, to an internationally accomplished conductor, Publisher Kalin Tchonev acquired a passion for music and literature at an early age. After graduating from high school in piano performance and music theory, he obtained a Bachelor's and Master's Degree of Music at the National Academy of Music in Sofia, Bulgaria. Later Tchonev continued his studies in the United States where he received two additional master's degrees in choral conducting and piano performance from the School of Music at the University of South Carolina. Apart from extensive choral singing and conducting experience, Tchovev combines music management, international tours, and festival organization to meet the needs of professional musicians and music lovers from around the world through his international performance management company Varna International: http://www.varnainternational.com

About the Author
Scott Cairns teaches modern and contemporary American literature and creative writing. His poems have appeared in Poetry, The Atlantic Monthly, The Paris Review, The New Republic, Image, Spiritus, Tiferet, among other publications and have been anthologized in Upholding Mystery (Oxford UP '96), Best Spiritual Writing (Harper Collins '98 and '00), and Best American Spiritual Writing (Houghton Mifflin, ‘04, ’05, and '06). His poetry collections include Slow Pilgrims: The Collected Poems (Paraclete Press, 2015), Idiot Psalms (Paraclete Press, 2014), Compass of Affection: Poems New and Selected (Paraclete Press, ‘06), Philokalia (Zoo Press '02), Recovered Body (Braziller '98), Figures for the Ghost (U Georgia P '94), The Translation of Babel (U of Georgia P '90), and The Theology of Doubt (Cleveland State UP '85). With W. Scott Olsen, he co-edited The Sacred Place (U of Utah P '96), an anthology of poetry, fiction, and nonfiction. His spiritual memoir, Short Trip to the Edge, (HarperSanFrancisco) and a collection of adaptations and translations, Love’s Immensity: Mystics on the Endless Life (Paraclete Press), both appeared in 2007. The memoir is being released in paper as Slow Pilgrim (Paraclete Press, 2016) and the translations appeared in paper as Endless Life: Poems of the Mystics (Paraclete Press, 2014). He received a Guggenheim Fellowship in 2006, and the Denise Levertov Award in 2014.

About the Illustrator
Boris Stoilov was born in Plovdiv in 1962. In 1989 he graduated from The National Academy of Arts - Sofia in discipline 'Graphics'. His works have participated in many national and international exhibitions. Since 1990 he has turned his interests to The Applied Graphics - printed advertising, design and books layout. He is working with some of the biggest Bulgarian publishers - "Hristo Danov," "Hermes, "Edition les Intouchables" - Montreal, Canada, Editions Michel Quintin-Waterloo (Quebec) Canada, Steaua Nordolui – Romania, and “Eduard“ Publishing house - Romania. During his career he made more than 2000 book covers and many fully illustrated titles. He is currently located in Plovdiv, Bulgaria.

Announcing a newly published collection of beloved Bulgarian folk tales brought to life for a new audience by Varna International Publishers. The Petals from the Rose Series presents the cherished folk tales of the land of Bulgaria newly translated for a new audience in the English language.