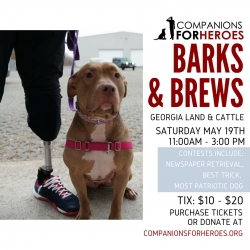 Companions for Heroes and Georgia Land & Cattle have partnered with Infield Media & Promotions to present and promote a Fundraising Event called “Barks & Brews.” This event will be held on Armed Forces Day, May 19th at 1733 E. President St, Savannah, GA 31404. The event will be held from 11:00 AM to 3:00 PM.

This important fundraiser is being presented in honor of our Armed Forces and in support of the “Companions for Heroes” (C4H) program. Funds raised will go directly to C4H.

Georgia Land & Cattle has chosen to support Companions for Heroes as a partner and friend in the Savannah area. Daniel Merritt, a Major in the United States Army Reserve with 15 Years of service in The Army, served in Iraq and Afghanistan and after his last deployment he left the Active army in 2013. After leaving active duty he co-Founded Nine Line Apparel and helped grow Nine Line into an amazing Veteran Owned Brand. (The “Barks & Brews” event is being held at a Nine Line Apparel location). Recently Daniel and his wife Sarah created a new company that was near and dear to their hearts and represented their Georgia lifestyle. The result was Georgia Land & Cattle "A Southern Lifestyle Company" to support Local Farms, Local Businesses, and Local People here in the Coastal Georgia Area. Daniel says “I think you will find that we have just the right gift for just about any occasion, for just about anyone you can think of. Even those friends and family who are impossible to shop for, we have you covered.” From Grass Fed Filet Mignon, to Savannah Southern Honey Roasted Coffee, to Home Decor Items made from the finest Southern Pine, we think we can make an impression that will last forever. Companions for Heroes is also a Georgia company.

The C4H program was founded in 2009 and has a mission of pairing shelter and rescued animals with 1% of our nation that volunteer to be public servants who place themselves in harm’s way who are challenged with PTSD and dealing with the experiences they have had protecting our way of life. Throughout C4H’s years the program has aided over 7,000 of America’s Bravest and found caring homes for numerous shelter animals. C4H is committed to providing a shelter or rescue animal [companion] to the active duty service member, military veteran, law enforcement officer, first responders and their family that do not have a companion in their life.

The day of festivities will include special guest speakers, the opportunity to meet other veteran run businesses and programs, C4H dogs and veterans, including canine demonstrations. There will be plenty of food available at the event along with select brews. Dogs are welcome at the event and there will be contests held for willing canine participants to include a Newspaper Retrieval, Most Patriotic Dog, and Best Trick!

Admission to the event will be $10 per person and includes a raffle ticket and a bandana or $20 to add two beer tickets. Tickets can purchased in advance via the website at: http://companionsforheroes.org/c4h-events/

Tickets may also be purchased at the event for $20. All proceeds above cost go directly to C4H.

Armed Forces Day (from Military.com): On Aug. 31, 1949, Defense Secretary Louis Johnson announced the creation of an Armed Forces Day to replace separate Army, Navy and Air Force Days. The single-day celebration stemmed from the unification of the armed forces under one agency -- the Department of Defense.

In a speech announcing the creation of the day, President Truman "praised the work of the military services at home and across the seas." He said, "It is vital to the security of the nation and to the establishment of a desirable peace."

In an excerpt from the Presidential Proclamation of Feb. 27, 1950, Truman stated:
"Armed Forces Day, Saturday, May 20, 1950, marks the first combined demonstration by America's defense team of its progress, under the National Security Act, toward the goal of readiness for any eventuality. It is the first parade of preparedness by the unified forces of our land, sea, and air defense."