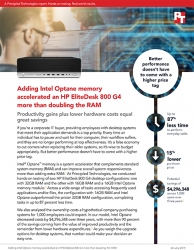 According to the report comparing the two EliteDesk 800 G4 configurations, “Intel Optane memory is a system accelerator that complements standard system memory (RAM) and can improve overall system responsiveness more than adding extra RAM.” The results PT found in their hands-on testing provide ample evidence to back that statement. In a range of tests, system and application tasks completed faster with the Intel Optane memory-driven system—saving up to 87% of time spent waiting. When employees spend less time waiting on their desktops, they can finish more work in a day. PT estimated that this productivity boost could lead to a business saving up to $4.7 million across 1,000 users over three years.

To learn more about the Principled Technologies testing results, see the following reports: