For the first time in the United States, from September 4 to 8, 2019, FRENCH FASHION WEEK NEW YORK, a High-End Experiential Platform, will present emerging and established Designers, historical "Savoir-Faire" craftsmanship so renowned in Haute Couture and Couture, as well as the Fashiontech companies of the future. 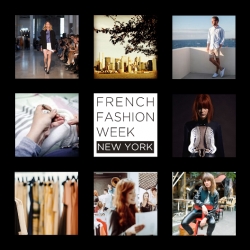 New York, NY, April 18, 2019 --(PR.com)-- The most important gathering of the French Fashion Industry ever organized in the United States.

The first edition of "FRENCH FASHION WEEK NEW YORK" will take place in Manhattan, September 4 to 8, 2019.

The ambition is to bring together a variety of actors of the French fashion industry to promote this major French industry in the United States. Initiated by the US Committee of France's Foreign Trade Advisers (CCE) and by French Touch USA, this event addresses a double antagonistic observation: French fashion is one of France's leading exporters, but is greatly under-represented in the United States, one of the world's largest importers of fashion goods.

Approaching the US under the "French Fashion Banner"
French Fashion Week New York will be a unique opportunity for the various American audiences (industry professionals, buyers, distributors, showrooms, influencers, media, investors and consumers) to discover some of the "best Kept Secrets" of French fashion, many coming to the US for the first time.

Another important objective of French Fashion Week New York will be to facilitate connections and help generate business interactions with the US market players.

The event will also support small companies of great talent who are often key players in French fashion but do not have the resources to come to the US alone.

In New York, they will rely on the expertise of the CCEs and US market experts, to guide them in the management of the opportunities presented to them.

To date, nearly 40 companies have already confirmed their presence at the event, during which the diversity of French "savoir-faire"(know-how) will be highlighted.

The motto: Give the opportunity to the French Fashion Industry participants to present their talent and diversity to the American market.

The participants, young designers or established brands can rely on a customized setup. Dedicated fashion shows, a showroom "à la française," as well as receptions, meetings and B2B events.

The organizers want to highlight the creativity and know-how of the French fashion industry while promoting its innovation and a more responsible approach.

Some names, among the first participants, make it possible to understand the spirit of this major event:

- Two emerging brands selected for Designers Apartment (organized by the Federation of Haute Couture and Fashion): Mazarine Paris, laureate of the Grand Prix of Creation of the City of Paris in 2015, and Clara Daguin, who combines artisanal work and emerging technologies
- Sami Nouri, a young Couture designer who worked at Jean-Paul Gaultier, an Afghan refugee who became the "little prince of fashion"
- Romain Brifaut, who has made a strength of his difference
- SAINT JAMES, labeled "EPV," whose know-how will celebrate its 130th anniversary in 2019
- Maison Jaubalet, a high end jeweler of the famous Place Vendôme
- Jeans 1083, the brand of organic jeans, made in France and eco-responsible
- Poétique Paris, a 100% vegan French fashion house or Atelier Alienor, a French ethical brand born in the heart of Texas
- Etablissements THIERRY and Atelier MARQUE & MOD who work for the most prestigious French fashion houses;
- But also ultramarine couture designers such as Raimana Cowan from Tahiti

About the Foreign Trade Advisors of France (CCE)
A network of 4,000 business leaders and international experts, chosen for their expertise, members of France's export team and supporting France's global development. Present in all regions in France and in more than 140 countries.

The Foreign Trade Advisors (CCE) volunteer pro bono their experience to benefit the development of France. They carry out daily concrete actions in partnership with public and private actors having a role in promoting and supporting the internationalization of French companies.

Appointed on the proposal of the Secretary of State for Foreign Trade, the CCEs are invested by the public authorities in four missions: counseling public authorities, supporting businesses, internationally educating young trainees and promoting France's attractiveness.