SMi Reports: The 14th annual Defence Exports conference attracts global acknowledgement with only 3 weeks left until the event this September in Amsterdam. 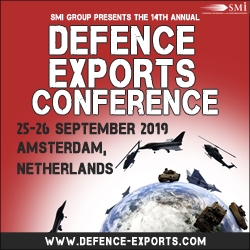 Day 1 of the conference will explore US related export policies and regulations, while Day 2 will focus on the rest of the world, with presentations and panel debates on international case studies, EU regulations and BREXIT.

For those that are interested in attending and with only 3 weeks to go, places will be limited for the conference and workshops. Registrations can be made on the event website at www.defence-exports.com/prcom7

Other Government industry experts speakers include:

For the full speaker line-up and event brochure, it is available to download online at www.defence-exports.com/prcom7

There will also be 4 focused workshops on Tuesday 24 September and Friday 27 September:

About SMi Group: Established since 1993, SMi Group is a global event-production company that specializes in Business-to-Business Conferences, Workshops, Masterclasses and online Communities. We create and deliver events in the Defence, Security, Energy, Utilities, Finance and Pharmaceutical industries. We pride ourselves on having access to the world's most forward-thinking opinion leaders and visionaries, allowing us to bring our communities together to Learn, Engage, Share and Network. More information can be found at http://www.smi-online.co.uk
Contact
SMi Group
Shannon Cargan
02078276164
www.defence-exports.com/prcom7