SMi Reports: Global MilSatCom 2019 to commence on 5th, 6th and 7th of November in London with an anticipated 20% increase from last year. 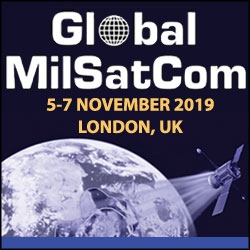 London, United Kingdom, September 18, 2019 --(PR.com)-- With 2019 an essential year, for both the host nation’s SKYNET programme, disruptive "go fast" efforts being pioneered in the US and NATO signing a new alliance-wide MOU – SMi Group will be hosting the 21st annual Global MilSatCom conference and exhibition in London on the 5th, 6th and 7th of November at the QEII Conference Centre.

With nearly 600 attendees expected, Global MilSatCom is a key calendar date for satellite professionals across the alliance. Last year’s attendance grew by over 20% and attracted the largest ever geographical spread in its history, with attendees from 35 countries.

The full event details and speaker line-up is available online at http://www.globalmilsatcom.com/prcom8

Broken into 4 dedicated days of content, this year’s meeting is set out to cover mission critical updates from national programmes from the US, Europe and the wider international community.

Once again, there will also be a pre-conference Small Satellites and Disruptive Technology focus day on the 4th of November at St James’ Court, London, which will explore developments in LEO small satellite constellations and how we can exploit these networks to deliver more capability on the ground.

The focus day will bring together leading commercial solution providers, those at the cutting edge of small satellite R&D (including Oxford Space Systems from the Harwell Science & Innovation Campus) and government end-users – to discuss what future trends in constellation development might have here on the ground.

Critical coverage of the UK’s SATCOM programme remains a key reason for attendance at Global MilSatCom. UK MoD presentations on day-one of the conference, will outline the host nation’s vision for future MilSatCom capability with presentations at all levels covering: Skynet 5 service delivery wrap, the future of Skynet 6 (which is set to provide the backbone of UK military capability until 2040 and beyond), terminals and more.

Conference day one presentation highlights for 2019:

Day-two of the conference will explore the future of MilSatCom for the United States, analysing growing requirements, programme proceedings and procurement plans.

Finally, day-three of the conference will cover key updates from the wider international audience.

Of course, unparalleled networking will be a key function of the forum, with 16 hours of breaks, two drinks receptions and two (invitation only) conference dinners, hosted by leading industry sponsors, Lockheed Martin, SES Networks, Eutelsat, Airbus. These sessions will bring together those setting requirements, procurement officers and end users to foster new working relationships.

Set to be an unmissable forum for anyone involved in the diverse array of MilSatCom, this conference continues to set itself centre stage as it celebrates its 21st birthday.

For those interested in attending Global MilSatCom 2019, there is an early bird saving of £100 for places booked before 30th September.

Registrations can be made online at http://www.globalmilsatcom.com/prcom8

For sponsorship and exhibition enquiries, contact Alia Malick on amalick@smi-online.co.uk

About SMi Group: Established since 1993, SMi Group is a global event-production company that specializes in Business-to-Business Conferences, Workshops, Masterclasses and online Communities. We create and deliver events in the Defence, Security, Energy, Utilities, Finance and Pharmaceutical industries. We pride ourselves on having access to the world's most forward-thinking opinion leaders and visionaries, allowing us to bring our communities together to Learn, Engage, Share and Network. More information can be found at http://www.smi-online.co.uk
Contact
SMi Group
Shannon Cargan
44 (0) 20 7827 6088
http://www.globalmilsatcom.com/prcom8