"Boneheads and Brainiacs" profiles the winners of the Nobel Prize in Medicine from 1901 to 1950 - a surprisingly diverse group of racists, eugenicists, cranks, and opportunists, as well as heroes, geniuses, and selfless benefactors of humanity. Forget all the ivory tower stereotypes of white-coated doctors finding miracle cures. "Boneheads and Brainiacs" reveals the messy human reality behind medical progress, in a highly entertaining book written for the ordinary reader. 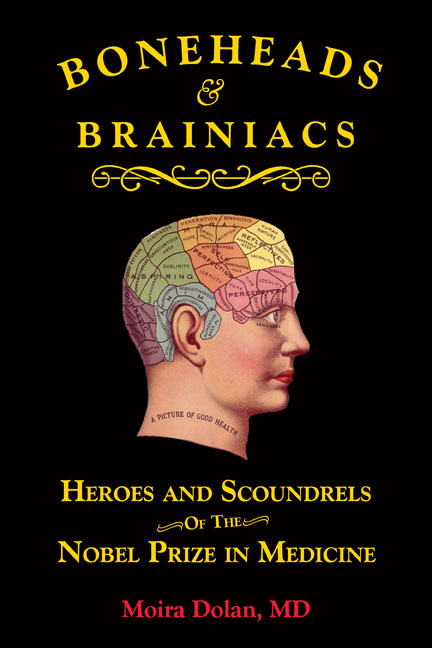 Fresno, CA, March 11, 2020 --(PR.com)-- A working physician presents entertaining profiles of the highs and lows of the Nobel Prize–winning medical research in the new book “Boneheads and Brainiacs: Heroes and Scoundrels of the Nobel Prize in Medicine” (Quill Driver Books, March 10, 2020) by Moira Dolan, MD.

“Boneheads and Brainiacs” profiles the winners of the Nobel Prize in Medicine from 1901 to 1950 - a surprisingly diverse group of racists, cranks and opportunists, as well as heroes, geniuses and selfless benefactors of humanity. Forget all the ivory tower stereotypes of white-coated doctors finding miracle cures. “Boneheads and Brainiacs” reveals the messy human reality behind medical progress, in a highly entertaining book written for the ordinary reader.

Medicine has made tremendous leaps forward in the past 120 years, but even the greatest medical minds have been terribly, terribly wrong. The inventor of the lobotomy won a Nobel prize in medicine for destroying his patients’ brains. Another Nobel laureate thought malaria cured syphilis. The discoverer of anaphylactic shock researched the spirit world and ESP.

Some of the heroes and scoundrels profiled in “Boneheads and Brainiacs”:

- Ivan Petrovich Pavlov is still famous for his experiments on conditioned reflexes in dogs, but he also conducted highly unethical experiments on defenseless and vulnerable human orphans - while enjoying the enthusiastic support of Russia’s Stalinist regime, which was eager to put Pavlov’s theories of human conditioning to practical use.

- Emil Theodore Kocher discovered the function of the human thyroid gland in the worst possible way. A gifted surgeon, he developed delicate techniques that allowed him to completely remove thyroid glands from goiter patients. He was later horrified to discover that his thyroidectomy patients lapsed into permanent intellectual disability - the first clue of the thyroid’s vital role in physiology.

- Alexis Carrel won the 1912 Nobel Prize for pioneering techniques to sew blood vessels and facilitate organ transplants. He also kept immortal chicken tissue alive in a lab flask and was an ardent eugenicist who later collaborated with the Nazis in Vichy France.

- A.V. Hill developed the disciplines of sports medicine and muscle physiology. Hill heroically denounced eugenics and Nazism and is remembered today for his steadfast advocacy for ethics in science and medicine.

- Antonio Egas Moniz is notorious for developing the surgical procedure of lobotomy, which ruined the lives of countless patients. A fervent eugenicist, Moniz also advocated for the sterilization of poor women and psychiatric treatment for homosexuality. Moniz won the Nobel Prize in 1949 for his work on psychosurgery. Unfortunately, he was unable to travel to Sweden to collect his prize; in 1939, Moniz was shot by a former patient and suffered a spinal injury, which confined him to a wheelchair for the rest of his life.

Some of these men were bad scientists; others were great scientists and lousy human beings. But the majority of the researchers profiled in “Boneheads and Brainiacs” produced knowledge that now saves millions of lives - priceless discoveries like the role of vitamins in nutrition, the dangers of radiation, treatments for diabetes and deadly infectious diseases, and more. “Boneheads and Brainiacs” showcases the enthralling, all too human personal lives that made modern medicine possible.

An absorbing and easy-to-read history of medical progress in the 20th century -and a fascinating roundup of unforgettable and eccentric characters - “Boneheads and Brainiacs” will make you look at medicine and science in a whole new way.