The 2nd Annual State of the Underdog Report 2020 shows there is tremendous potential upside for investors if the barriers faced by underestimated entrepreneurs can be overcome. Underdogs include women, Blacks, Browns, Latinx, LGBTQ, older, differently-abled, non-Ivy League graduates and all others who have been conditioned to believe that entrepreneurial success is not possible for people like them. Promise Phelon, an underdog, highlights the upside for investors and opportunity for founders. 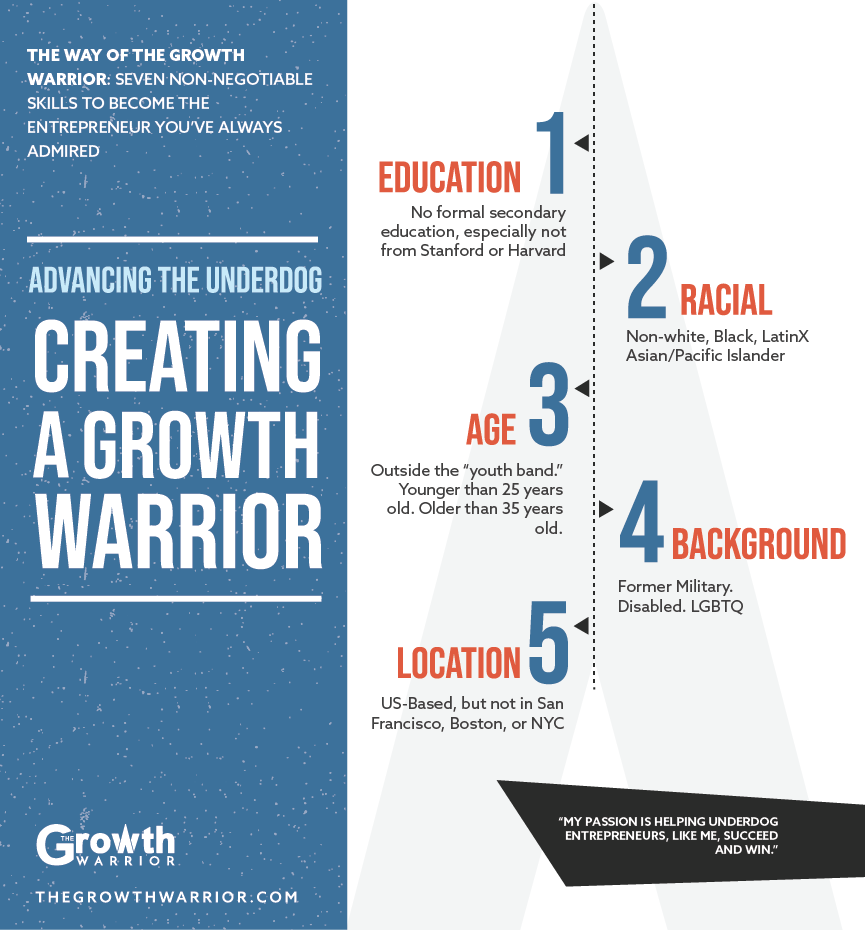 San Francisco, CA, September 10, 2020 --(PR.com)-- Earlier today, The Growth Warrior released its second annual “State of the Underdog Report 2020.” In spite of current economic conditions, two tenets hold true: one, there is capital available for investment in disruptive innovation; and two, investors are continually seeking unique opportunities to yield returns. From the entrepreneurs' perspective, there is a whole new class of scrappy founders emerging from the rubble of a global pandemic poised to launch new businesses. The only catch? A lack of diversity within the investor class stands in the way. As a result, the gap between underdogs and their ability to fundraise is widening.

"Entrepreneurship should be a contributor to equality, rather than a detractor from it. We need to continue to rethink the dissemination of knowledge, capital, and talent to make the gift of entrepreneurship accessible to all. Collating diversity data into an Annual Underdog Report is one way, the other is to boost representation. For instance, Promise is part of the 0.2% successful women of color in tech and that number is far too small,” says Mark Roberge, Senior Lecturer at Harvard Business School and Managing Director at Stage 2 Capital.

Call it "unconscious bias" or call it fact. The data leave little room for interpretation. Only 2% of Venture Capitalists (VCs) are Black executives at the partner level and only 8% are women. Of the more than 1,000 VC firms established in the US, there are fewer than 200 individuals (not firms) who are Black or Latinx. A staggering 74% of VCs do not have a female (cis- or trans-) at the executive level. Looking beyond those with cheque-writing authority to job opportunities, 22% of VC workforce identifies as BIPOC (Black & Indigenous People of Color) and 6% of VC firms employ a member of the LGBTQ company: for both cohorts, nearly all roles held are in marketing.

This lack of diversity is obstructing the growth of under-served entrepreneurs and stymying ROI for the investment community. The team at The Growth Warrior wanted to take a look at some of the underlying causes of reduced access to capital in under-served entrepreneur groups. These “underdogs” include LGBTQ, BIPOC, women, differently-abled persons, graduates of non-Ivy League schools and first-time entrepreneurs who have set up shop outside Silicon Valley, Boston and NYC.

Promise Phelon, the author of this report and the book, “The Way of the Growth Warrior,” which will be released later this month, shares why she investigated the capital and equity gap. “We wanted to expose the enormous and largely untapped potential for investors. It’s time to look beyond traditional funding opportunities and to recognize the value that can be realized through the investment in underdogs. However, as research shows, the disparity between access to wealth and support for the underdog is widening.”

Who’s getting all the money? In 2019, an all-time high of $3.3 billion (or 2.8%, up from 2.2% in 2018) was invested in US businesses with at least one female founder or co-founder. To put that into perspective, a total of $137 billion was deployed by the venture industry for investment in US-based businesses last year. VC funds established by Black executives invested $370 million of the $131 billion total VCs invested in US businesses in 2018.

Greg Sands, founder and managing partner Costanoa Ventures voiced his support for informative reports like this, "I was excited to see this Underdog Report because there are so many great places to build businesses and potential for everyone. With only ~20% of startup capital going to businesses established outside Silicon Valley, NYC and Boston, there's an opportunity for us as investors. What it takes is an open mind and playing the long game."

Among the LGBTQ cohort, only 30% of founders who identify as female were able to raise $750 thousand dollars or more and just over half of founders who identify as male crossed the $1 million dollar capital raise. Many LGBTQ persons do not disclose their status in fear of being declined access to capital. Blacks start new businesses with an average of $35 thousand compared to White founders who begin with an average of $80 thousand. In today’s COVID era, Black-owned businesses are closing at nearly three-times the rate of White-owned businesses (41% vs. 17%).

How can I learn more? To download your copy of “The Warrior Report: State of the Underdog 2020” click here.

About The Growth Warrior: The mission of The Growth Warrior company is to identify, educate, elevate, empower and invest in underdogs to drive returns for investors and positive outcomes for founders. The VC-backed startup is focused on acquisition and transformation of tech companies with potential. It was founded by serial entrepreneur Promise Phelon, who has raised over $100 M in capital and represents the underdogs of Silicon Valley; she serves as inspiration and a model for all those who aspire to do more and overcome the barriers of the status quo. Hence, to coincide with the release of this report, the professional development book, “The Way of the Growth Warrior,” will be released later this month. Pre-order the book now to secure early access and VIP benefits for the upcoming mentoring Master Class to help you become a Growth Warrior.

Infographic Summary of State of the Underdog Report

The Warrior Report: State of the Underdog 2020 highlights the widening diversity and equity gap. It also showcases the upside of investing in underdogs (Blacks, Latinx, BIPOC, LGBTQ, differently-abled person, first-time founders, non-Ivy League graduates and others) if barriers are removed.